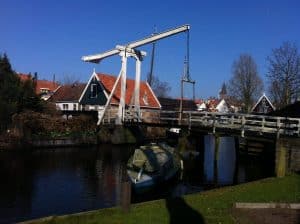 The town of Edam.

Today was the day we were set to depart on our preview cruise. After getting up, grabbing breakfast, and getting our last glance at land, we set sail around 10a. It was neat to see the ship going through locks. Turns out every town is called DAM because a lot of Netherlands is below sea level and dams were built to keep the water out. Interesting factoid.

The day started with the ships godmother, Dr. Lisa Richard, giving us a lecture about her latest book, which was very interesting but to be honest, physics at 11am hurt my brain. It hurt my brain so much that right after the lecture, I went and crashed out for a couple of hours. When I woke up we were in Volendam. The own of Volendam is a quaint little town, almost reminiscent of a small northeast fishing village, like Martha’s Vineyard, Massachusetts.

At 1p we got off the ship and boarded the motor-coach to head to Edam and then onto Marken. Edam is a city known for its cheese where a lot of people bought cheese to take home. I took a liking to the pesto cheese and learned that in the olden days they used to shoot cheese out of the cannons. Imagine your ship being sunk by a cheese ball?! The Marken (photo below) fishing village used to be an island away from the mainland until a causeway was build in the 50’s. We walked around for about 45-minutes before taking a ferry boat back to Volendam where a lot of people did some shopping and checked out the small towns. 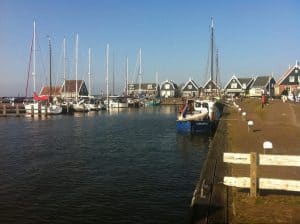 The fishing village of Marken.

One thing I like about all the ports on this trip is that no one is pressuring you to buy anything. River cruising has a totally different feel than Ocean cruising in that respect. If you want it, you can go in the shop and buy it, if not, no big deal. The locals are just happy to see the cruise passengers.

Once we got back to the ship we went to dinner at 7 where Chef de Cuisine Kark-Heinz cooked up some great dishes. For some reason nothing on the main menu struck me so I went with the standard steak and potato type meal (that’s available every night). During dinner we set sail to Kinderdijk where we’re scheduled to arrive in the morning.

The night time entertainment on the ship is very low key. We had a piano player playing until about 1am and the bar that served until pretty much the last person went to sleep. This is a ship where you have to be social or it wouldn’t be for you. With under 200 people sailing, it’s a very intimate atmosphere and you will make friends on the sailing. There’s no hiding!

Rhapsody of the Seas emerges from dry dock a new ship

Bluegrass theme cruise to be held on Norwegian Sky