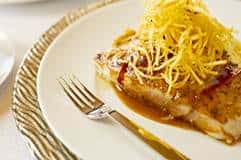 Windstar Cruises announced today that Wind Surf, the company’s flagship sailing yacht, will feature a new dining experience once the yacht’s dry dock is completed on December 1st. Formerly known as Degrees, the venue will be transformed into a contemporary dining room with a French twist, and will be renamed Stella Bistro. The name, derived from the Latin word for star, was selected as a tribute to the restaurant’s special dining experience, unique to the fleet as Stella Bistro will only be on Wind Surf.

The newly created menu will draw on contemporary dishes with a French flair, as exemplified by entrees such as Coquille St. Jacques Provençale, a seared, skewered scallops dish served on pappardelle and tossed with artichoke hearts, spinach and capers in a light, white wine sauce; or the Roasted Magret of duck, a duck breast and duck confit on cherry sauce paired with parisienne potatoes and French beans.

Other menu items, inspired by the seasonings and flavors used in French cooking, include escargots bourguignon; cream of wild mushroom soup; and goat cheese soufflé. Dessert is a decadent affair with dishes such as apple aumoniere, a combination of apples, marzipan and honey baked into a filo pastry and served in vanilla custard; or chocolate Napoleon, the famous French pastry that consists of layers of soft, creamy chocolate and praline.

Guests can also choose to include paired wines in the Stella Bistro dining experience. Specially selected by the executive chef to enhance the flavors, three different glasses of wine are served in combination with the appetizer, entrée and dessert. For the first time this winter season, Windstar will offer European wines by the glass, such as a deep red French Burgundy or a crisp Italian Pinot Grigio, in addition to the extensive offerings of the American regions typically served in the Caribbean.

With a capacity of eighty-six diners, the intimate setting will receive new furniture, flooring, wine display cabinet, and a collection of classic and contemporary pendent lighting. The walls will be decorated with an eclectic mix of antique mirrors and vintage photographs.