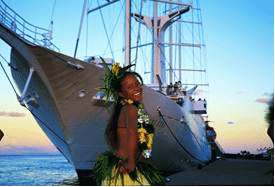 Windstar Cruises announced today that they will return to the South Pacific in the summer of 2014. Beginning May 2, 2014, Wind Spirit, the line’s recently renovated 148-passenger sailing yacht, will sail seven-day voyages from Papeete, Tahiti. Wind Spirit will sail 28 voyages in Tahiti, with the last voyage on November 7, 2014, before returning to Panama and Costa Rica for the winter season. The line’s return to the French Polynesia Islands marks the first time Windstar has had a ship sailing in Tahiti since 2002.

The week-long voyage will begin in Papeete, Tahiti – the world’s definition of paradise. Wind Spirit will sail to the following islands:

This will be the first time the recently renovated Wind Spirit will sail the South Pacific. With six sails that cover 21,500 square feet, the French-built sailing yacht is ideal for cruising in the French Polynesia Islands under the power of warm breezes and tall billowing sails. Guests can enjoy the aqua blue water of the South Pacific Ocean at the back of the yacht with Wind Spirit’s watersports platform, which offers paddle boards, kayaks, water skiing, wind surfing, snorkeling equipment and more.

Guests will delight in the immersion of the South Pacific culture, brought to life in Windstar style. Local entertainment, such as traditional Tahitian dancers, will come on board for a magical evening to remember. Regional dishes will be incorporated into Windstar’s signature deck barbecue, held under the sails and stars one night per cruise. Shore excursions will be tailored to give guests experiential and romantic options delivered in true French Polynesian style.

Windstar’s voyages from Tahiti go on sale to the public in mid-March 2013.