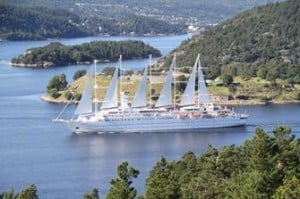 Windstar Cruises is featuring a Sail & Stay promotion on all Northern Europe voyages, with 2-for-1 cruise fare, plus two free hotel nights. From the glittering styles and vibrant harbors of Scandinavia’s capital cities, to the hidden coves and rolling hills of Northern Europe’s beautiful islands and quaint villages, guests can discover the fjords of the Baltics and the castles of Ireland, starting at $2,999, based on double occupancy, when booked by December 29th, 2012.

The Northern Europe voyages feature a variety of new shore excursions in 2013. For those looking for an epicurean adventure, there’s plenty to taste from a truffle making workshop in Tallinn, Estonia to traditional afternoon tea at Caerhays Castle in Falmouth, England. Guests can experience once-in-a-lifetime adventures such as kayaking in the Aland Archipelago in Mariehamn, Finland or racing the Isle of Man TT Course in a specially designed three-seater trike.