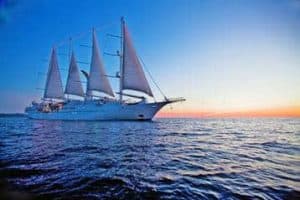 Windstar Cruises is offering the last Sail & Stay promotion of the year for 2013 European voyages with 2-for-1 cruise fares, plus two complimentary hotel nights. This exceptional offer which ends at midnight Saturday, April 27 features two nights in one of Windstar’s hand-picked luxury hotels in some of Europe’s most wonderful cities. The two complimentary hotel nights can be used before or after the voyage and are offered in the following cities: London, Rome, Dublin, Santa Cruz de Tenerife, Stockholm, Istanbul, Cairo, Athens, Lisbon, and Barcelona.

Hear our interview with Windstar Cruises President and CEO.

With so many options, there is something for everyone. For example, guests wanting to extend their vacation in Stockholm, Sweden after sailing the eight-day voyage Best of the Baltics will stay at the Scandic Anglais Hotel in the heart of Stureplan, and step back in time in the Old Town. For those looking to further relax after they step of Casablanca & the Canary Islands, Hotel Botanico in Santa Cruz de Tenerife, Canary Islands may be the best choice. The hotel is situated close to a number of local beaches, and also includes: The Oriental Spa Garden, which offers a choice of relaxing Asian-influenced spa treatments. Whether on land or at sea, guests will always enjoy the Windstar style of pampering without pretense, extraordinary destinations, and casual elegance.

More ‘Dancing with the Stars’ at Holland America