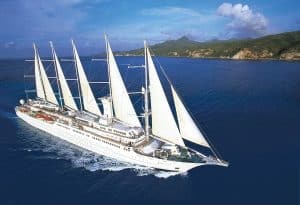 Seattle, October 25, 2011 – Windstar Cruises, which operates a fleet of three luxury sailing yachts that explore hidden harbors and secluded coves of the world’s most treasured destinations, will include complimentary soft beverages on all voyages starting this December.

The addition of soft beverages increases Windstar’s complimentary offerings which include dining at Windstar’s specialty restaurants—Candles Grill on each of the three yachts, and Degrees and Le Marché on Wind Surf; complimentary watersports such as kayaking, waterskiing, sail boating, and windsurfing from Windstar’s Watersports platform; and complimentary DVD and iPod rentals.