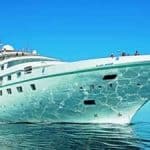 Windstar Cruises has announced the name for the first of its three new, all-suite, power yachts as Star Pride. Star Pride, launching in May of 2014, will spend its first season in Europe offering exciting new voyages which open for bookings on May 14, 2013. The names of the additional two yachts will be announced in the coming weeks.

The new power yachts are identical, with a guest capacity of 212 each in 106 suites. At 10,000 gross tons, each yacht is 440 feet long with a breadth of 63 feet and six passenger decks. As the three yachts enter the fleet, they will all undergo a Windstar branded renovation. The new power yachts will showcase many signature Windstar experiences, including the line’s famous deck barbecue, the open Bridge policy, and the celebrated sail-away party.

Following the May 2014 introduction of Star Pride, Windstar Cruises will take possession of the additional two yachts in in April and May 2015. These two yachts are scheduled to start sailing in May of 2015 following their dry-dock period.