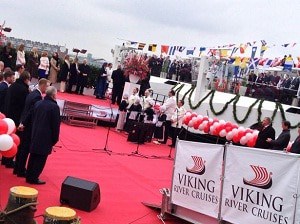 Earlier today Viking River Cruises christened 10 190-passenger longships  in Amsterdam, making them the only cruise line in the world to launch that many vessels in one day. That’s a lot of godmothers!

Today’s christening more than doubles last year’s event when two ships were named pierside in Amsterdam and two from the ship yard via satellite.

At 443 feet long, Viking’s Longships has some of the most innovative and eco-friendly ships sailing today.

Hear our broadcast from last years christening aboard Viking Odin.