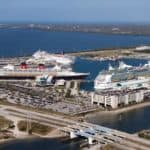 After nine years on the job the Canaveral Port Authority voted on Wednesday morning to relieve CEO Stan Payne of his duties. He is being placed on paid administrative leave until July, when he will be officially let go.

The commissioners cited high turnover rate and him being unable to get along with outside businesses. In 2012, Payne signed off on a video about the dangers of offsite parking which caused an uproar with offsite lots.

“These people have worked very hard for the port and I will miss them, ” Payne said in an interview with Florida Today.

Payne will continue working on cruise and cargo contracts for Port Canaveral until July. Meanwhile a nationwide search starts for a new Port Canaveral CEO.

Payne was responsible for the upcoming channel widening, the new Cove Marketplace,  the amphitheater and observation tower.

Below is the questionable video Payne signed off on.