The colorful work of award-winning Spanish artist Eduardo Arranz-Bravo will grace the hull of the Norwegian Encore when the ship makes her November, 2019 debut in Miami.

How His Artwork Was Chosen

The artist’s modern, abstract style will see the Encore’s hull encompassed in a kaleidoscope of colors. The work is inspired by Arranz-Bravo’s love of (and life by) the sea. “Eduardo’s design will be a perfect complement to the collection of hull artwork within our fleet,” said NCL}s president and CEO, Andy Stuart, “and is a testament to the dynamic experience our guests will have on board.”

“Norwegian Cruise Line is a dynamic, pioneering company known for its innovative experiences and breathtaking collection of beautifully designed ship,” Arranz-Bravo said. “I am honored to not only bring that vibrancy to life even more on Norwegian Encore but also showcase my love for the ocean and my hometown of Barcelona.”

Frank Del Rio, the president and CEO of Norwegian Cruise Line Holdings, played a major role in selecting Arranz-Bravo as the artist whose work would grace this particular ship. “We are well-known for our iconic hull designs,” said the exec, “and know that Arranz-Bravo’s lively design will complement the colorful destinations in the Caribbean that Norwegian Encore will visit.” 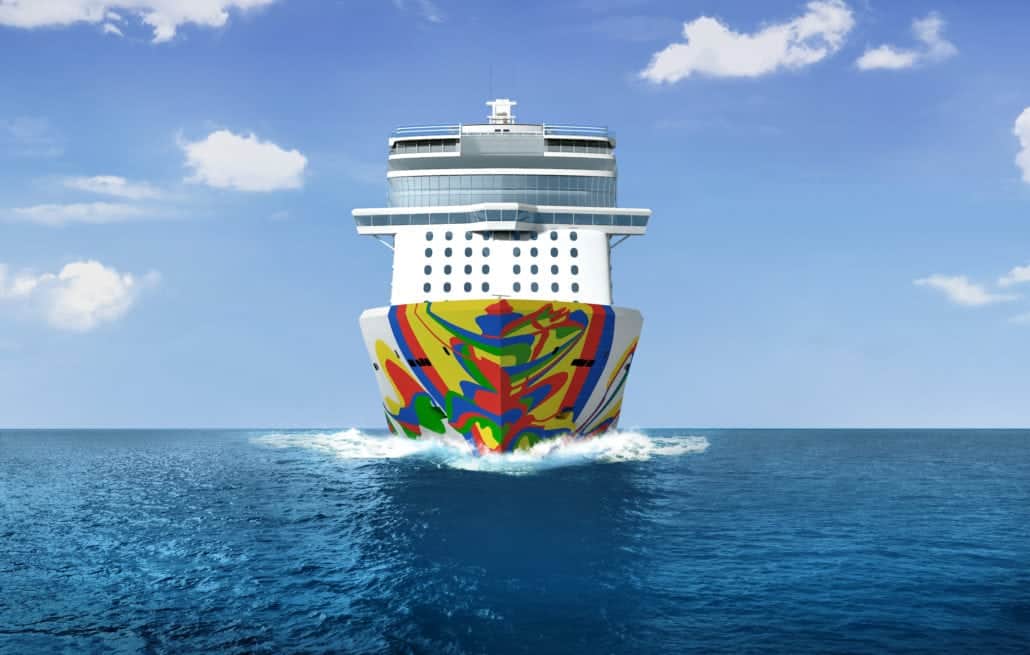 The Norwegian Encore will be the fourth and final ship in the Breakaway-Plus class, joining the Escape (2015), Joy (2017) and Bliss (2018). Weighing in at 167,800 gross tons, she’ll carry around 4,000 guests, which is about 900 fewer than Bliss. Currently under construction at the Meyer Werft shipyard in Germany, Encore will eventually sail seven-day Eastern Caribbean voyages deparing Miami each Sunday. Her first scheduled sailing is November 17, 2019.

Meanwhile, in other hull-related news, there are still staterooms available for the Guy Harvey Conservation Cruise. Departing October 21, 2018 out of New York City on the Norwegian Escape, the 7-day voyage to Florida, Nassau and Great Stirrup Cay will feature a slew of special events hosted by Harvey, whose artwork graces that ship’s hull.

Send this to a friend
Hi, this may be of interest to you: Check Out Norwegian Cruise Ship’s New Hull Art [Photos]. This is the link: https://cruiseradio.net/check-out-norwegian-cruise-ships-new-hull-art-photos/