A Royal Caribbean cruise ship’s attempt to avoid bad weather put them in the right place, at the right time, allowing them to help rescue two men who’d been stranded for over two weeks.

How The Rescue Happened

“Wow,” wrote Royal Caribbean’s chief meteorologist James Van Fleet on Twitter, “Extremely proud of [Royal Caribbean’s Empress of the Seas’] officers and crew. Two mariners had been at sea for 20 days between Grand Cayman and Jamaica. Had we not changed itinerary to get to better weather, we would never have been in that spot at that time. Well done, Empress!”

Royal Caribbean’s meteorologist posted this picture of the rescue of two fishermen by the captain and crew of the Empress of the Seas. (Photo via Twitter.com/JamesVanFleet)

Social media posts from those aboard the ship report that the rescued men were fishermen from Costa Rica who had been lost at sea for over 20 days. When the ship’s radar picked up what seemed to be an anomaly, the Captain discovered that it was, in fact, a small fishing boat.

Van Fleet’s twitter feed is a must-follow for those planning a Royal Caribbean sailing, as he winds up being among the first to know about developing problems. For example, on Thursday, his feed alerted Rhapsody of the Sea passengers of a major change, saying they had modified the ship’s Saturday departure “from Tampa to Port Canaveral,” explaining that by doing so, they would have “much less swelling transiting from the East Coast of Florida at that time, and then we can proceed much more comfortably down to Cozumel.” 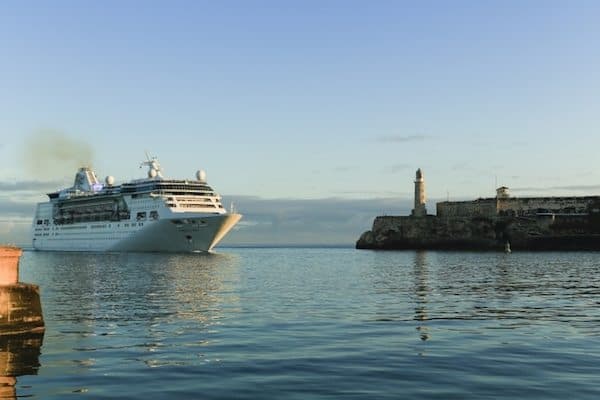 Empress of the Seas sails into Havana, Cuba – photo: RCI

Empress of the Seas is currently on a 6-day Best Of Cuba sailing which set sail from Miami on December 17 and will — after visits to George Town, Grand Cayman Island; Cienfuegos, Cuba; and Havana, Cuba — return to Miami on the morning of December 23.

Send this to a friend
Hi, this may be of interest to you: Cruise Ship Itinerary Change Leads To Miracle At Sea. This is the link: https://cruiseradio.net/cruise-ship-itinerary-change-leads-to-miracle-at-sea/