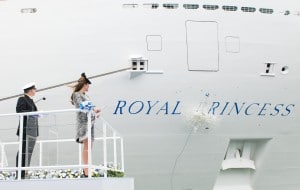 Her Royal Highness The Duchess of Cambridge Kate christened Princess Cruises’ new Royal Princess today in Southampton when she released a bottle of champagne that smashed against the ship’s hull.

Standing on the naming platform with the ship’s Captain Tony Draper, The Duchess pronounced, “I name this ship Royal Princess. May God bless her and all who sail in her.” She then cut the rope that sent a giant Nebuchadnezzar-size bottle of Moët & Chandon champagne toward the ship, welcoming Royal Princess into the Princess fleet. 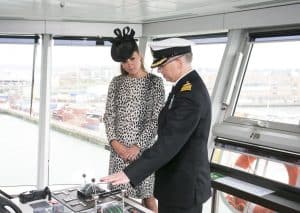 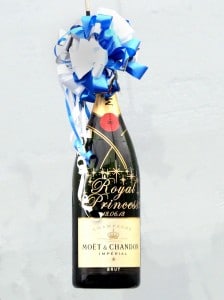 The bottle of Moet & Candon Brut moments before it smashed against the bow of Royal Princess. Photo Courtesy Princess Cruises

Following the ship’s maiden voyage to Barcelona on June 16, Royal Princess will sail the Mediterranean during the summer, followed by Eastern Caribbean cruises beginning in this fall.

A replay of the Royal Princess naming ceremony is available at www.princess.com/royalprincessnaming.

Simon Duvall is a luxury cruise expert and agent and co-host of #CruiseChat, the only cruise-centric community chat on Twitter. Visit www.CruiseChatLive.com and check out #CruiseChat every Tuesday at 2 pm ET on Twitter.