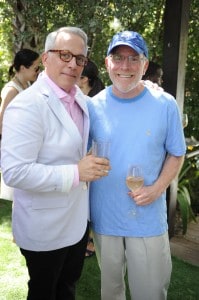 Norwegian Cruise Line announced today that celebrity chef and Food Network star Geoffrey Zakarian will create and oversee the opening of his seafood restaurant, Ocean Blue by Geoffrey Zakarian, on the line’s newest ship, Norwegian Getaway, which will sail year-round to the Eastern Caribbean from Miami beginning February, 2014.

The restaurant, Ocean Blue by Geoffrey Zakarian, will bring a luxury seafood dining experience to Norwegian Getaway, utilizing all of the ingredients and techniques that Zakarian employs in his land-based establishments, including his signature modern presentations to three distinct dining locations on board: Ocean Blue, Ocean Blue on The Waterfront, a more casual dining option serving fun and easy fare and The Raw Bar, serving crustaceans and wines by the glass.  In developing the Ocean Blue concept for Norwegian’s newest ship, Zakarian orchestrated every aspect of the restaurants, from the delectable menus to the uniforms and the glassware. On select sailings, Zakarian will also host meet-and-greets with Norwegian Getaway guests, along with in-person cooking demonstrations and intimate cooking experiences for smaller groups. The first location of Ocean Blue will premiere on board Norwegian Breakaway, Norwegian Getaway’s New York City-based sister ship in April 2013.

Video: Disney Wonder Returns to Alaska in May

Quantum of the Seas Godmother Named