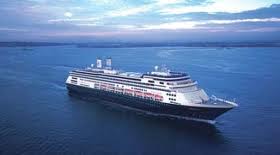 Six Holland America Line ships will sail 28 full and partial transits of the Panama Canal during the fall 2013 through spring 2014 season, which coincides with the canal’s 100thanniversary. Ranging in length from 10 to 22 days, the extensive itinerary options provide guests with more ways to experience the Panama Canal than any other cruise line.

“The Panama Canal is a ‘must see’ for many travelers because of the historic technology and beautiful scenery,” said Richard Meadows, Holland America Line’s executive vice president of sales, marketing and guest programs. “The Panama Canal changed travel by enabling easy travel between oceans, and it’s exciting for us to make several canal cruises in the season celebrating its 100th year.”

Sailing through the Panama Canal with Holland America Line is more than moving through the locks and lakes that make up this man-made marvel. The itineraries feature ports with attractions such as walking along the ramparts of a colonial Spanish castle, exploring ancient Mayan ruins or going on a “skywalk” in the Costa Rican rainforest.

More details on the sailings can be found on Holland America’s website.