Holland America Line is shaking things up with their new and exclusive craft cocktail menu, created in partnership with the “King Cocktail” himself — Mixologist Dale Degroff. 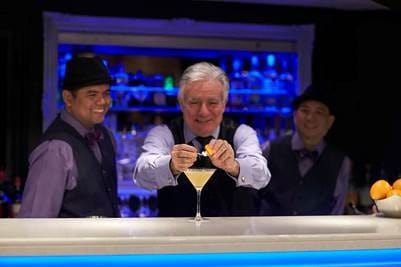 If you’ve been anywhere even remotely trendy lately, you’ll notice the rising popularity of “crafted cocktails:” libations that are meant to involve all the senses. And, from eclectic, fog-covered drinks to torched garnishments, Dale Degroff and Holland America’s new menu is no stranger to the alluring movement. In fact, according to the line, the menu is meant to be an embodiment of HAL’s dedication to being in the “forefront of food and beverage trends.”

Dale Degroff has actually been innovating HAL’s drink offerings since 2016 and — if you don’t know who he is — he comes with quite the resume. Not only is he the founding President of the Museum of the American Cocktail, but he is also a James Beard Who’s Who of Food & Beverage in America Inductee. Needless to say, the guy knows what he’s doing.

What’s On The Menu

So, what interesting drinks will you find on your next cruise?

Do you enjoy sipping on a trendy, crafted libation? Which of these creations looks most enticing to you?