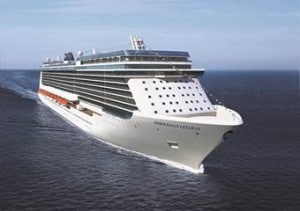 Miami can add another ship to call one of their own as Norwegian Cruise Line announced this morning that their upcoming 4,000-passenger Norwegian Getaway will homeport there in 2014.

Norwegian Getaway is the second of two ships that the company has on ordered. It was announced earlier this year that Norwegian Breakaway will homeport in New York City. Norwegian Breakaway is currently under construction at Meyer Werft shipyard in Papenburg, Germany

“Miami has been the home of this Company since our beginning in 1966. Therefore, we are so excited to bring one of our two new Breakaway-class ships here to Miami to homeport year-round,” said Norwegian Cruise Line Chief Executive Officer Kevin Sheehan. “Norwegian Getaway will embrace all that the Magic City has to offer and will offer an extraordinary cruise experience to the more than 4,000 guests who will sail on her each week beginning in spring 2014.”