Back in November, I was on a transatlantic cruise from Barcelona to New Orleans, and one of the stops in between was in Grand Turk, Turks and Caicos – that’s where I discovered Jack’s Shack.

It’s pretty much just what it sounds like, a shack, located just past the commercialized cruise pier and Margaritaville. 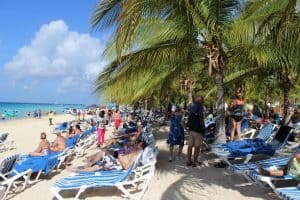 The view stepping onto the beach at Grand Turk.

So here’s what we found out about Jack’s Shack, Grand Turk:

Jack (yes, he’s a real person) was a contractor from New England when the cruise pier was being developed 10 years ago. He met a lady and loved the area so much that he decided to stay. As he told me in an interview, “the rest is history.”

Jack set up tiki hut  just off the beach that serves up local Turk’s Head Beer, shots, and even some great jerk BBQ and snacks. 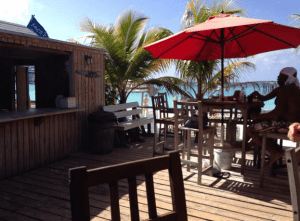 The view from Jack’s Shack.

How to get there 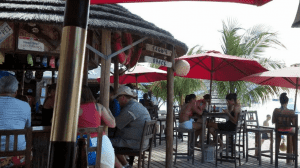 I noticed everyone getting free shots of liquor on my recent visit so I asked Jack what that was all about. He told me if I went to the website and printed out a coupon, I could bring it in for some free rum. You can print the coupon out here.

Not only is Jack’s Shack a great chill bar, but also a place to soak up the sun. Right when we got there I asked a beach attendant if we could get four beach chairs and an umbrella. He did everything for us from setting up the chairs to digging a hole for the umbrella. We tipped him $20 and he seemed happy enough. To me, it was totally worth being far away from 3,000 other cruise passengers.

The water at the beach is crystal clear and makes for some great snorkeling, which is what I did. You won’t find any reefs or sunken wrecks on the beach but you’ll find crystal clear water and white sandy beaches. 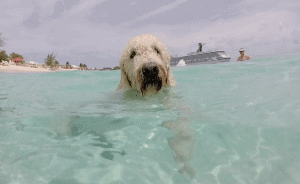 Jack’s dog, Topher, likes to swim right alongside you.

More info on Jack’s Shack can be found on their website jacksshack.tc.

5 Caribbean Beaches for your Christmas Card