Project Leonardo will be the next class of ships after the company’s Breakaway Plus vessels are complete. The last Breakaway class ship will be Norwegian Encore in late 2019, joining sister Norwegian Joy, Norwegian Bliss, and Norwegian Escape.

“Following the Breakaway Plus Class, the most successful class in our Company’s history, the highly anticipated Leonardo Class will fuel future growth with exciting and innovative offerings that will meaningfully drive demand from new and loyal returning guests alike,” said Andy Stuart, president and chief executive officer of Norwegian Cruise Line. 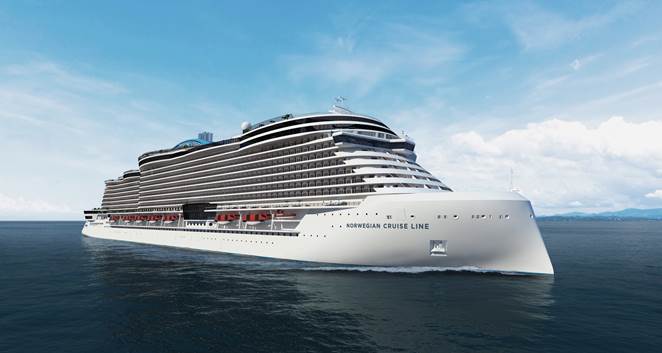 Dubbed “Project Leonardo,” the four 140,000 gross ton ships will each hold around 3,300 guests, and be built on the success and flexibility found on the line’s recent Breakaway-Plus class ships.  A priority for the company in the new ships’ prototype is energy efficiency, with the aim to optimize fuel usage and reduce environmental impact.

“These orders extend our disciplined and measured newbuild program and strong growth trajectory well into the future and will further drive long-term returns for our shareholders,” said Frank Del Rio, president and chief executive officer of Norwegian Cruise Line Holdings Ltd.  “Our six-ship Leonardo Class fleet will allow us to broaden our deployment into strong performing and mature unserved and underserved markets and offer new experiences to our guests.”

Hi, this may be of interest to you: Norwegian Cruise Line Confirms More Ships. This is the link: https://cruiseradio.net/norwegian-cruise-line-confirms-more-ships/