Armando Christian Perez, known as Pitbull, took the stage and gave a show-stopping performance to a packed room of attendees from across the travel and tourism industry. He rocked the stage with his best hits, including “Don’t Stop the Party,” “Feel This Moment,” and “Fireball.” 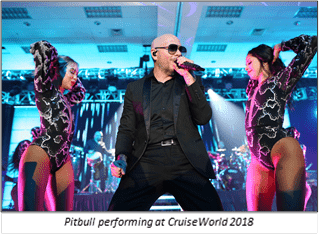 Pitbull has been a partner of Norwegian since 2015, when he became godfather of the first ship in the Breakaway Plus class, Norwegian Escape. Since then, he’s hosted several music festivals at sea, including the Pitbull After Dark Party on Norwegian Pearl and Jade. He also made a surprise appearance at the christening of Norwegian Bliss, the line’s newest ship.

“When I was a kid, I used to look at the cruise ships leaving port and say, ‘one day I want to be able to get on a cruise,’” said Pitbull. “What a blessing. From a father who brought boats over on El Mariel, to be able to godfather my own cruise ship…it goes to show that anything you want to do in life, you can do it. ¡Dale!”

Send this to a friend
Hi, this may be of interest to you: Norwegian Hosts Event Featuring a Performance by Pitbull. This is the link: https://cruiseradio.net/norwegian-hosts-event-featuring-a-performance-by-pitbull/