Eric and his wife Jessica from Tampa, Florida recently went on a cruise aboard Norwegian Jade.  They was kind enough to send us a full review of the voyage, ship, and Norwegian’s new private island Harvest Caye.

Check out their thoughts here:

The service at all food facilities was exceptional. The service for dinner in the Grand Pacific was superb. Our recurring wait staff Janice Rudinas and Ratheesh Franklin, along with helper Jessa, were amazing. Their attention to detail deserves recognition as they remembered our names, our recurring drink orders, took the time to converse with us while still being attentive to other guests in their section, and provided all around excellent service in regard to timing of dish delivery, keeping water glasses full, etc. We very much enjoyed sitting in their section. Overall, food quality was excellent, however food variation/selection could have been a bit better, especially in the buffet area where a lot of breakfast/lunch items were recurring.

Lastly, we would like to recognize Kimberly Millan from the buffet area. Kimberly was in charge of the hand sanitizer (“washy washy”) upon entering the buffet area – she always had a big smile on her face, would engage with you and was often found singing & dancing to the “washy washy” song causing guests to laugh and sing/dance along with her. For being assigned a relatively menial task, Kimberly really went above and beyond in her service duties.

Our room steward Gina Sardido was wonderful. She recognized that we tended to sleep in and remembered this even if we sometimes forgot to flip the ‘do not disturb’ sign. We always had everything we needed, and she even went above and beyond to secure us additional mattress padding when we commented about the firmness of the bed. We did have a minor issue of being charged for items from the mini bar and ponchos that we never purchased – we weren’t aware of these charges and had to clear it up on disembarkation day which was kind of a bummer.

The layout of the cabin and the amentities available were great. We really appreciated the excellent water pressure in the shower. The bathroom in general had a nice vibe with the faux wood walls and aqua tile, and the layout was good for the size with plenty of counter and storage space for toiletries. The balcony was great and we probably spent more time on ours than any prior cruise we’ve taken where we’ve had a balcony stateroom. The high privacy walls between rooms was appreciated. Honestly, our only real complaint with the room was the bed: the mattresses seemed like maybe they were past their prime as both sides were concaved in the middle and both mattresses were extremely firm – to the point where we asked Gina if there was anything she could do about it. We also had a few issues with the air conditioning where we had it as warm as it would go and it was still exceedingly cold in the stateroom. It was odd because this was not a consistent issue.

We were very surprised with how good the entertainment was this voyage, especially the performance cast and their productions. The Blazin’ Boots and Elements shows were truly exceptional. There is one performer in particular we’d like to recognize and that is Lamoi Hedrington of the performance cast – he brought such energy and passion to his dancing often we would find ourselves watching him in particular vs the other dancers on the stage. He was truly sensational. We also very much enjoyed the performances of Anna Kaelin, Madie Kuepfer, Katie McGinnis and Josh Flegg. Overall, the singing and dancing of the performance cast was top notch and we enjoyed all their shows. The additional entertainment was also superb: we especially enjoyed Dmitry and Ksenia, the acrobats – Ksenia is a beautiful dancer and their fusion of ballet and acrobatics was sensational. Adding their love story to their performance was the icing on the cake, they were truly beautiful to watch and their ode to Swan Lake was lovely to see. The magicians were also very neat to watch as was comedian Rod Long, who we enjoyed. To date, we watched more of the entertainment available on this cruise than any other we’ve taken (and we’ve taken 15+ cruises) and thoroughly enjoyed it all. The Temperature Band was awesome and we really enjoyed their tunes in the Spinnaker Lounge later in the evening. Guitarist Matt was also awesome during the Blazin’ Boots show and in the various lounges around the ship. Lastly, the cruise team did an awesome job with keeping the energy high and providing entertainment – we enjoyed The Not So Newlywed Game, Majority Rules, and the Perfect Couple game shows that the team put on. Dingo Dave, Sin, Guido, and the rest of the team are fabulous and do a great job. Casino was great – the layout of the tables & machines was well thought out and we didn’t have issues trying to navigate around people even when the shows from the Stardust Theater let out. The cashier’s desk was always well-manned so you didn’t have to wait very long for service. My main complaint would just be about the ventilation/air flow through the casino given that smoking is allowed. I’ve been on other ships were smoking is also allowed but the cigarette smell/smoke is less noticeable. On the Jade you could smell the cigarette smoke as you were coming downstairs near the casino so it was wafting out quite a distance into the surrounding staircases and corridors of the ship.

Library: For the first time this cruise we made use of the library – we played sud0ku daily and really enjoyed that the ship provided these fun, easy games. The library was usually surprisingly full and while we didn’t check out any books, we appreciated that the option was available. 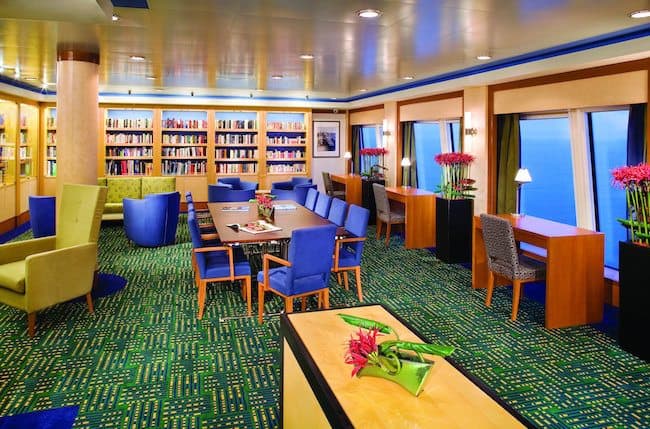 Harvest Caye was beautiful! Unfortunately, on the day we visited it rained, limiting our exploration of the island. However, what we were able to see was very well done. The little shops and bars were close together and access to them was easy, the pathways were nice and wide to accommodate a lot of people, the pool was huge and very cool – the swim-up bar a nice feature. The beach was where we spent our time. While we wish the swimming area had been larger (my wife was out by the buoys pretty quickly), there was a nice expanse of beach with plenty of chairs – we were surprised (and appreciative) of the large lifeguard presence on the beach and at the pool, and we were able to see wildlife beyond the buoys (dolphins, fish and birds). Watching people zip line overhead was very neat as well – though we personally felt the cost for that experience was a tad high.

The island is beautiful and Norwegian Cruise Line has done a great job with it – our only minor complaint is that they should attempt to integrate spending on the island with onboard accounts, especially since Norwegian is already developing a repetition for being the “nickel and dime” cruise line.