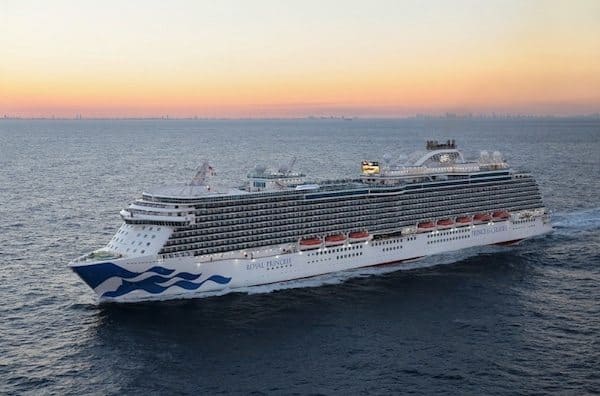 Princess Cruises has announced that their fourth Royal-class ship will be named Sky Princess. Sister ship to Royal, Regal, and Majestic Princess, the vessel is scheduled to debut in October 2019 and begin her service sailing a series of Mediterranean voyages.

The 143,700 ton, 3,660 guest ship will feature an evolution of the successful design used for previous Royal-class ships. Sky Princess will include the brand’s signature elements and the best features found on her Royal-class sister ships.

Highlights will include a soaring Piazza-style atrium, Princess Live! entertainment venue, the adults-only deck Sanctuary, Camp Discovery youth and teen centers, and a variety of guest-favorite dining venues. These will include the Salty Dog Grill, Alfredo’s Pizzeria, Vines Wine Bar, Chef’s Table Lumiere, and World Fresh Marketplace. Sky Princess will, of course, also offer the outdoor “Movies Under the Stars” theater, and 80 percent of all cabins will have balconies.

Voyages are available for booking beginning December 14, 2017. Those with an elite Princess Cruises status in the Captain’s Circle loyalty program will be able to secure their booking a day earlier than the general public, on December 13.

The fifth Royal-clas ship is also currently under construction at Fincantieri shipyard and will debut in 2020.