The beautiful city of Tampa is located on the west coast of Florida, only about an hour from Walt Disney World. What began as a small fort during the First Seminole War has become the center of a thriving metropolitan area of over three million people.

Photo via Port of Tampa

For families using Tampa as their cruise port, there are many options that could easily fill a week. Let’s first take a look at the details of Port Tampa, where the ships dock, and some of the logistics. Then, we’ll dive into what to do in Tampa before your cruise.

The Port of Tampa 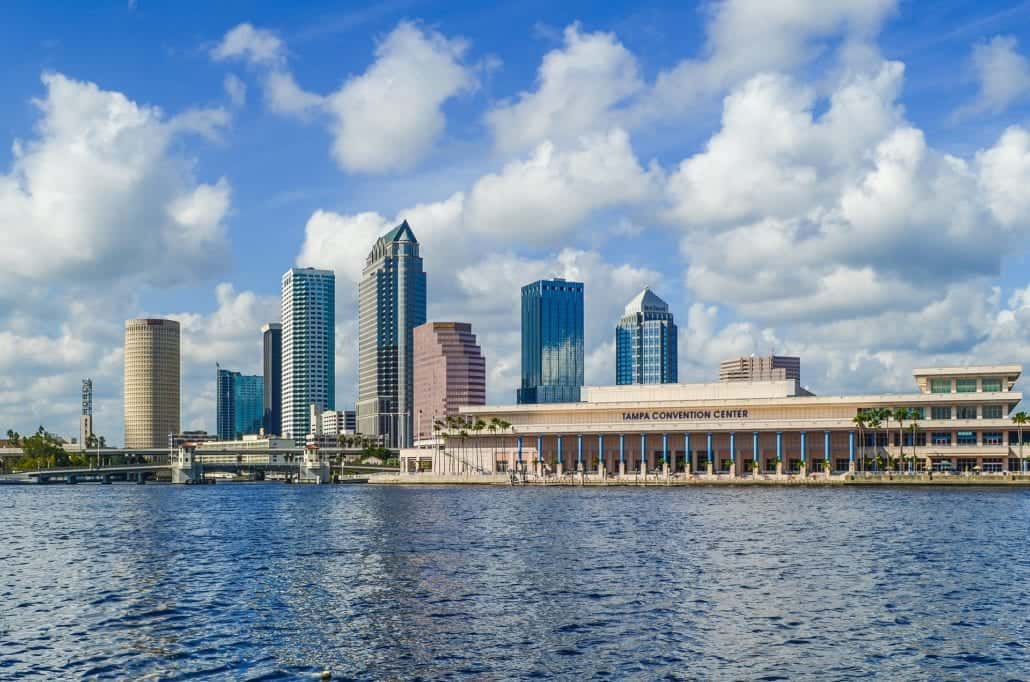 Connections to the highways here are simple, and the airport is a short 20-minute car ride away (unless it’s a morning or evening commute, then count on 30 minutes or more).

Located immediately beside the cruise terminals is a parking garage that charges $15 per day, though there are also smaller lots that charge as little as $8 — if you are willing to walk a bit.

Many passengers choose to drop their family off at the curb next to the ship and then park in the garage or lot nearby. Another option is staying at a Tampa Bay hotel. Some properties offer “stay and cruise” packages where guests can stay the night, park at the hotel, and be driven to the port in a courtesy van the next day.

A simple internet search for “stay and cruise Tampa” will provide several options.

What to do with a family in Tampa?

The Tampa Bay area is one of the most popular destinations for families from across the country. With its central location between Orlando and the sugar-white sands of the Gulf beaches, there really is no limit to the family-friendly activities to experience. If your family is planning on only a day or two in Tampa before or after your cruise, then you will have to make some tough choices!

Near the Port of Tampa

If you only have one day or even just a few hours, there is plenty to do near the port. Starting with Channelside itself, the Sparkman Wharf area is hopping with lots of restaurants, live music, and shops. 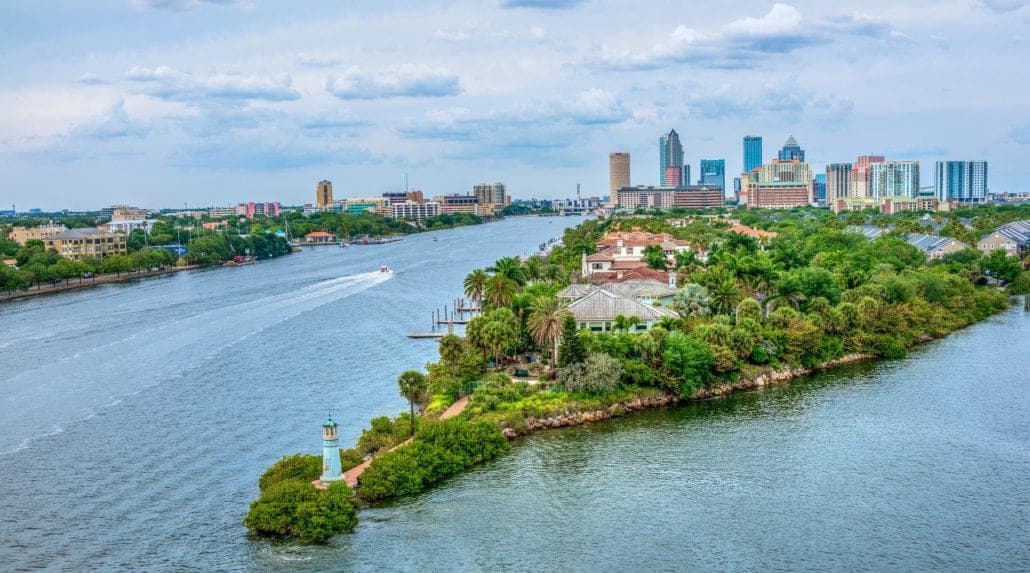 Additionally, it is conveniently located along the Tampa Riverwalk: where visitors can stroll for nearly two miles along the Hillsborough River, seeing much of the city — including the iconic minarets of the University of Tampa.

The end of the Riverwalk is in Tampa Heights, where there is the exciting Armature Works complex with food stalls and interesting shops. Bicycle rentals are available as well, which makes taking in the Riverwalk a breeze! Also along the Riverwalk are several parks with kids play areas, as well as the fantastic Tampa Museum of Art.

Directly next to the port, and within a short five-minute walk from any of the cruise-terminals, is the architecturally stunning Florida Aquarium. Containing animals from the swamps of the Everglades (including alligators, otters, and snakes) to the jellyfish and sharks of the open ocean, the aquarium is a centerpiece of the Channelside area.

If you only have a few hours before or after your cruise, then the Florida Aquarium is an excellent choice. It is mostly indoors and has lots to see and do, including a penguin animal encounter, animal exhibits and an outdoor splash pad (bring a swimsuit and towel, there are changing rooms).

Threading throughout the area is the complimentary TECO Line Streetcar. Connecting Downtown, Channelside, and Ybor City, the streetcar is an attraction in and of itself which shouldn’t be missed. The cars are replicas of the original ones from the 1800s. And, if the weather is fine, you may even get to ride the “breezer” car, which is all open air. 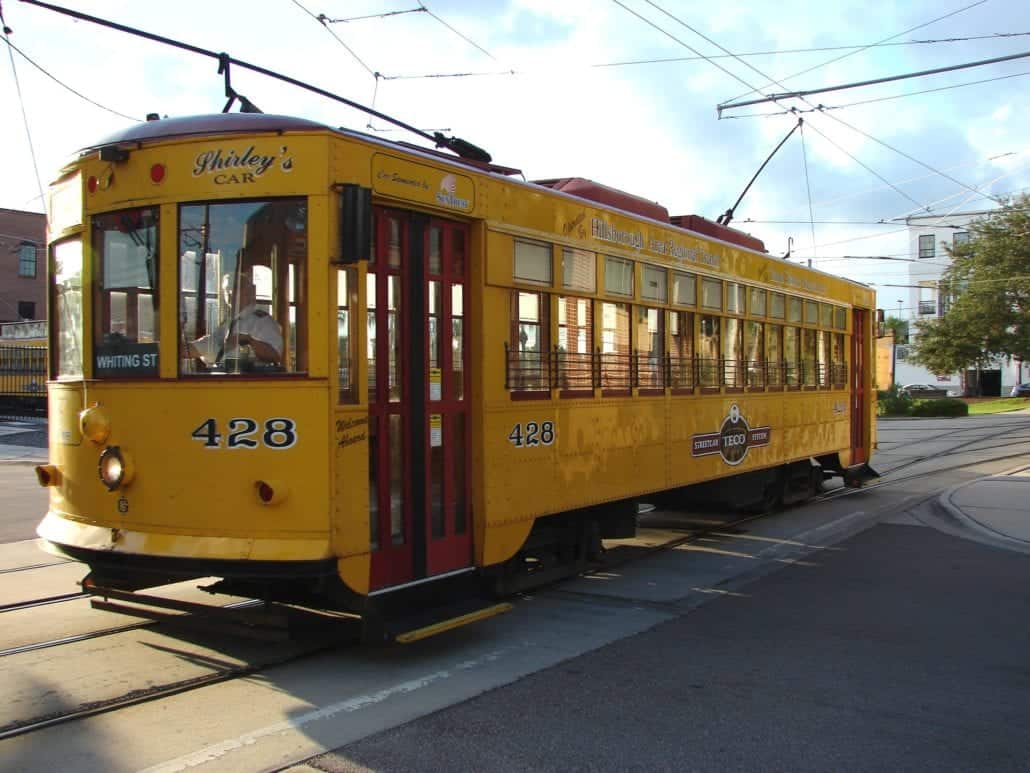 Riding north from the Port area, you will come to Ybor City: the Latin Quarter of Tampa.

Founded by Cuban, Italian, and Spanish immigrants, Ybor was originally a Cigar manufacturing town and filled with cigar factories. Now, the area is very atmospheric with iron balconies, brick streets, and buildings filled with restaurants, bars, and shops. There is also the excellent Ybor City State Museum where families can learn the unique history of the area and even tour an original cigar workers cottage.

If your cruise is stopping in Havana, Cuba; then I would recommend visiting Ybor City! It played a pivotal role in the island’s independence movement from Spain. While the Ybor City area is very interesting and unique, it is probably more appropriate for families with older children, though anybody would certainly enjoy a ride on the streetcar and a delicious Cuban Sandwich from local favorite Carmine’s, or any number of other restaurants in the district.

Famed as one of the top theme parks in the country, Busch Gardens has more than enough thrills and excitement to keep the whole family engaged for an entire day. If you’re planning on visiting, make sure to get there early to make the most of your time. Lines build up quickly, and the Florida sun can zap energy. Filled with roller coasters of all types, a vast array of African wildlife, and great children’s play areas, this park is sure to delight.

I won’t write too much about Busch Gardens as there is a lot of information on the web already devoted to it, but if a theme park experience is what your family is looking for, then it definitely delivers. Additionally, right next door is the Adventure Island Water Park, which requires separate entry tickets and is open for much of the year (aside from winter).

Stretching for nearly 40 miles, the Gulf Beaches of Pinellas County consistently rank as some of the top beaches in the world, according to Tripadvisor.com. From Honeymoon Island and Clearwater Beach in the north to St Pete Beach and Ft DeSoto in the south, these barrier islands have any type of beach that a visitor could want. Families will revel in the clear, calm water and soft sugar-white sands.

The most natural of the beaches are the Florida State Parks which bookend the island chain, Honeymoon Island and Ft Desoto. However, these are also a bit further of a drive from the Port of Tampa (about 60 minutes each) as opposed to some of the other beaches (which would be about 45 minutes). 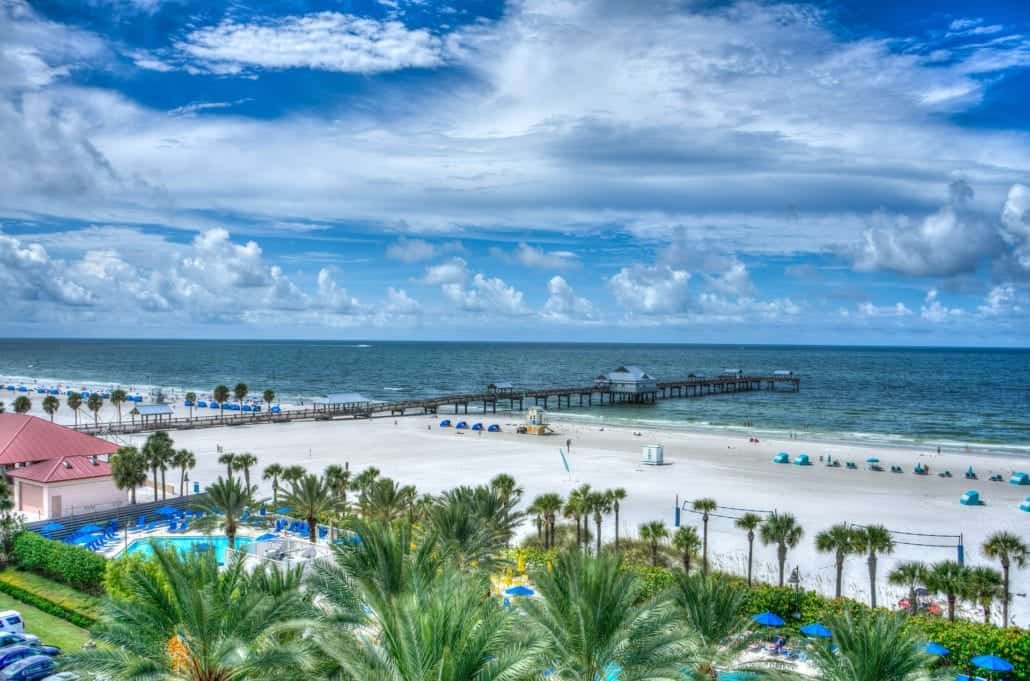 Clearwater is one of the many beautiful beaches easily accessible from the Tampa area.

Clearwater Beach is most famous for tons of tourist amenities — such as a pier, beachside walking path, and lots of shops and restaurants — but it also gets the most crowded. For a small taste of old-time Florida, head to St Pete Beach’s Pass a Grille neighborhood, which was at one time a small fishing village on the island, but now caters to tourists and locals with boutique shops and restaurants.

Madeira Beach is in the middle of the chain and is known for the famous Johns Pass Fishing Village boardwalk. However, any of the beaches will deliver the same beautiful water, sand, and sun, so really there is no bad choice.

Of course, there are many more options for families who are in the Tampa Bay area, including swimming with manatees in Crystal River (about an hour north), the Lowry Park Zoo (which was voted by readers of Child Magazine as the top family zoo in the country), art museums and culture in St Petersburg, and if you are in town during their seasons, the Tampa Bay Lightning hockey team, Buccaneers football, or Rays baseball.

Whatever you choose, your family will be sure to have an amazing time in Tampa, FL.

If the bayside scene is more your speed you can take a drive down Bayshore Boulevard.

Consider using Uber. Depending on what time of day you’re trying to get to the cruise pier will determine if taking an Uber or Lyft is cheaper than taking a cab. There is a flat rate fee from the Tampa airport to the cruise port of $28. Uber/Lyft start at $18.

Tampa airport has 34 restaurants and 45 shops. You can find everything from fast food like Wendy’s to sit down places like Hard Rock Cafe.

Essential Apps for Your Next Cruise Vacation

Can you Vape on a Cruise

Send this to a friend
Hi, this may be of interest to you: Things to Do in Tampa Before Your Cruise. This is the link: https://cruiseradio.net/things-to-do-in-tampa-before-your-cruise/