Island hopping is a popular activity on Hawaii cruise vacations. Some of Hawaii’s most enchanting islands are just a quick hop away, making it convenient to take day trips or even add an overnight visit. Each island offers unique experiences and a decidedly different feel, allowing travelers to see and do more during their Hawaii vacation.

Norwegian Cruise Line’s Pride of America overnights in Maui’s port of Kahului, giving its cruise guests two full days to explore. For guests who are already familiar with some of Maui’s delights, taking a day trip to Lanai should be at the top of their excursion list. This unspoiled island paradise is filled with stunning beaches, breathtaking landscapes, exciting adventures and world-class vacation experiences. Quick flights to Lanai from Honolulu make it convenient to visit Lanai before or after a cruise, too. Un-Cruise Adventures includes a full day in Lanai on their Hawaii cruise itinerary as well. 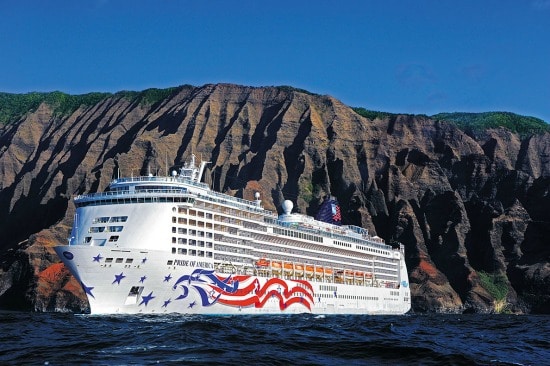 It’s easy to take a day trip to Lanai on the EXPEDITIONS ferry service, which conveniently departs to and from Maui’s Lahaina Harbor five times each day. Humpback whales can often be spotted on the company’s short ferry rides from late December through April. EXPEDITIONS offers a number of “Explore Lanai” packages that include championship golf, guided tours, and even luxury overnight accommodations for those who would like to stay longer.

Lanai is called “Hawaii’s Most Enticing Island.” Home to just over 3,000 residents, Lanai has one small town and no traffic lights. Only thirty miles of Lanai’s roads are paved. Here you’ll find lavish five-star luxury and superb world-class golf juxtaposed against forty-seven miles of pristine coastline and networks of isolated red dirt roads that can be explored via four-wheel drive.

Lanai’s aloha spirit can be felt everywhere. The island, the people and the culture combine to create a memorable destination experience.

Here are seven top things to do when visiting Lanai:

1. Find Your Perfect Beach. Lanai’s exquisite beaches will beckon lovers of sun and sand. Two of the most notable off-the-beaten-path beaches are two-mile long Polihua Beach and Kaiolohia, an eight-mile long strand known as Shipwreck Beach. Ancient petroglyphs can be found in this area and turtles can often be seen sunning themselves on the sands there. Lanai’s Hulopoe Beach has been named as America’s Best Beach by “Doctor Beach,” Stephen Leatherman. Nearby Puu Pehe, also called Sweetheart Rock, is a must-visit spot. 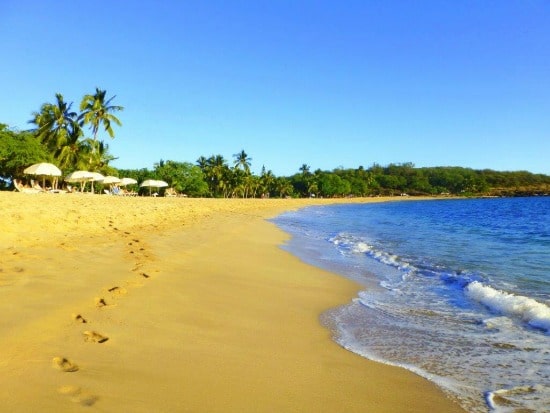 2. Head for the Water. Hulopoe Bay is a protected marine preserve. Its rich waters are great for snorkeling, swimming and other water sports such as SNUBA, scuba and Stand Up Paddleboarding.

3. Get Off-Road. Those who wish to explore Lanai on their own can reserve a 4 wheel-drive Jeep through EXPEDITIONS or make advance reservations to rent a vehicle through Dollar Rent A Car on Lanai. Guided tours with Rabaca’s Limousine Service or touring independently via four-wheel drive are popular here. Don’t miss viewing the lunar-like landscapes found at Keahiakawelo, also known as Garden of the Gods. The huge boulders and rock formations are extraordinary. Visitors also enjoy hiking or 4-wheel driving along Lanai’s famed Munro Trail. 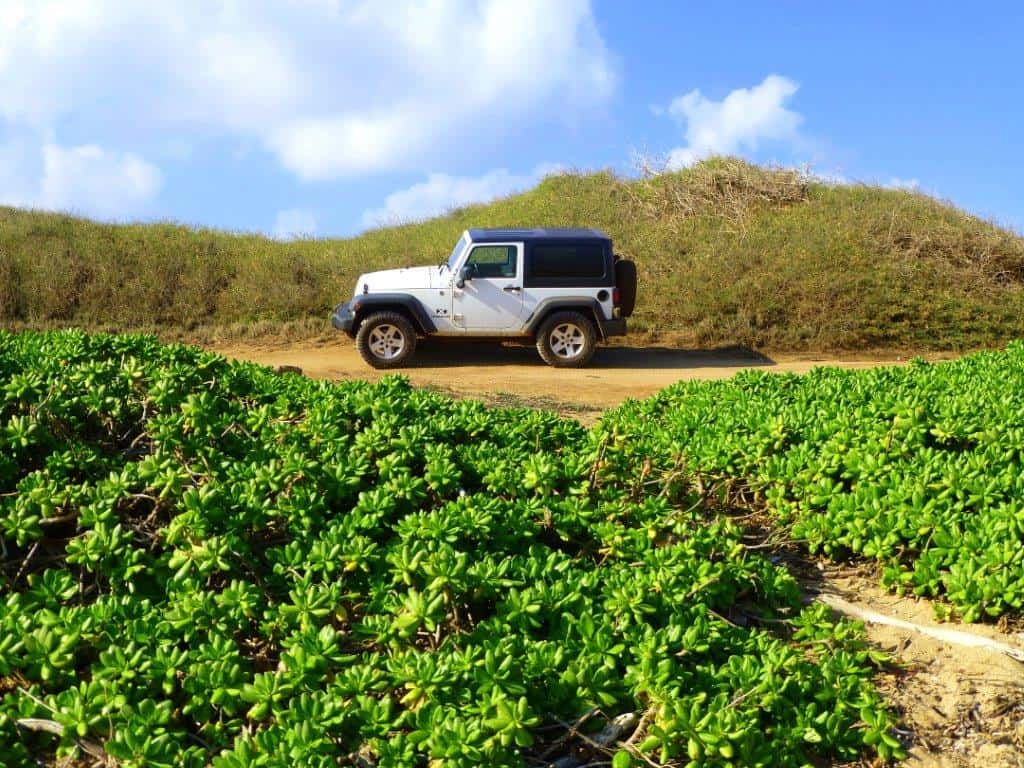 Going off-road is popular on Lanai

4. Explore Lanai City: Lanai City is home to some great restaurants & boutiques. Visitors enjoy viewing stunning artwork at the Mike Carroll Gallery and browsing through shops such as The Local Gentry.The historic exhibits at the Lanai Culture & Heritage Center make it well worth a stop, too.

5. Sample the Cuisine. Guests who are just visiting Lanai for the day may wish dine at one of the restaurants at the Four Seasons Resort Lanai at Manele Bay such as VIEWS, offering breathtaking views of Puu Pehe and Hulopoe Bay. Blue Ginger Café is located in Lanai City, and it’s popular with both visitors and locals. Additional great spots to eat in Lanai City include Pele’s Other Garden and the Lana’i Ohana Poke Market. 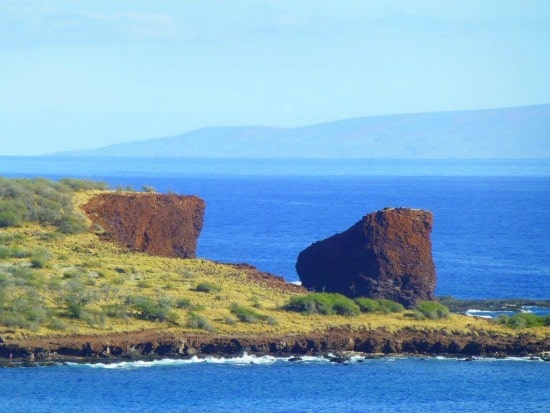 7. Give Back. The non-profit Lanai Animal Rescue Center (L.A.R.C.) outdoor animal sanctuary is home to well over 300 homeless cats, affectionately known as “Lana’ian Lions.” Island guests can visit daily to help with the sanctuary’s “Pet & Purr” cat socialization program and other activities. The Four Seasons Resort Lanai at Manele Bay has partnered with L.A.R.C. on voluntourism activities through its Kokua Project as well. 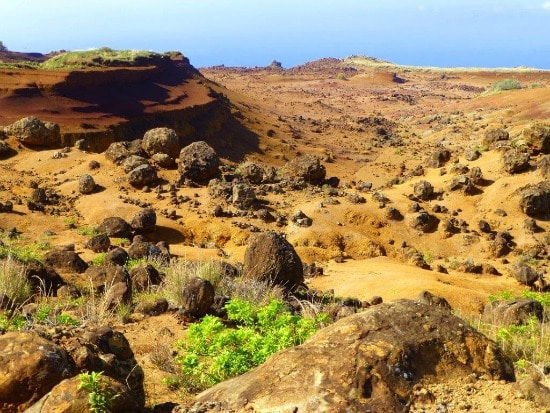 Lunar-like vistas at Keahiakawelo, also known as Garden of the Gods

The historic Hotel Lanai was built in the early 1920’s to house Dole executives. This charming upcountry inn with 11 rooms is a good choice for those on more of a budget. Located right in Lanai City, it makes an excellent home base for exploring the island.

For more detailed information about planning a day or overnight trip to Lanai, visit https://www.gohawaii.com/lanai.

Nancy Schretter is the Managing Editor of the Family Travel Network.

6 Delicious Caribbean Eats You Have to Try

6 Awesome Beers From the Caribbean