What could have been a not-so-miniature disaster was handled quickly by the folks at Carnival Cruise Line, who this morning issued an update on the situation aboard the Carnival Dream. As we first reported on Friday, the ship suffered a water line break which caused fairly substantial flooding on one deck of the ship. 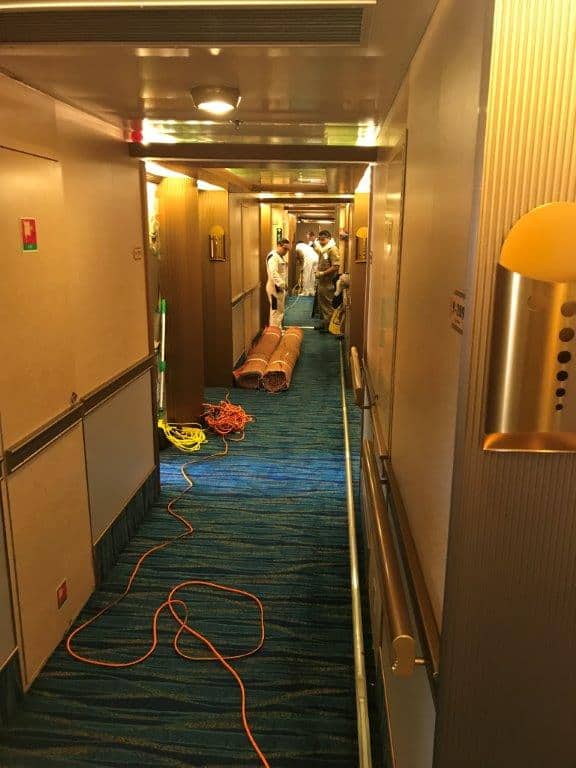 cleanup is well underway in the flooded hallways and cabins

In a statement released today, Carnival said, “The Carnival Dream has continued on its 7-day Caribbean cruise uninterrupted after the water line break on Thursday evening, May 3. It will return to its homeport of New Orleans as scheduled on Sunday morning. The water main break had no effect on the safe operation of the ship. The safety and security of our guests and crew is our top priority.”

The statement went on to praise the actions of everyone on board. “Both our crew and our guests have been amazing during this voyage. The water line break occurred at 6 p.m. and in six hours, our crew had replaced hall and stateroom carpeting, dried out other sections of carpeting that were damp but did not need need to be replaced, and restored the 50 stateroom so that all guests could sleep in their beds that evening. There were a handful of guests that chose to sleep elsewhere that first night and we moved mattresses to the spa for them.” Cleanup is well underway in the flooded hallways and cabins.

“We never want our guests to experience anything other than a perfect vacation, so we sincerely regret that we inconvenienced nearly 100 guests. We provided a full refund and a future cruise credit as a goodwill gesture. We offered to fly the impacted guests home at our expense if they wanted to disembark early and only two of the nearly 100 guests that received our offer chose to do so. Most of the guests on board were not even aware of the incident until the last 24 hours as word circulated and our passengers heard from friends and family who saw media reports. Needless to say, the tremendous positive attitude of our guests and crew is proof of why we are America’s favorite cruise line.”

Send this to a friend
Hi, this may be of interest to you: Carnival Cruise Ship Flood Situation Updated. This is the link: https://cruiseradio.net/carnival-cruise-ship-flood-situation-updated/