If you’re a cruise addict, sooner or later you’re probably going to wind up looking for cheap flights. Sure, there are those who only cruise out of their homeport, but unless you happen to live in Florida — out of which approximately a gazillion ships a year set sail — you’re likely to eventually want to do something other than the limited number of ships and itineraries available from the port closest to your home. Or maybe you find a great deal on a one-way voyage and will need to fly to either the departure or arrival port. 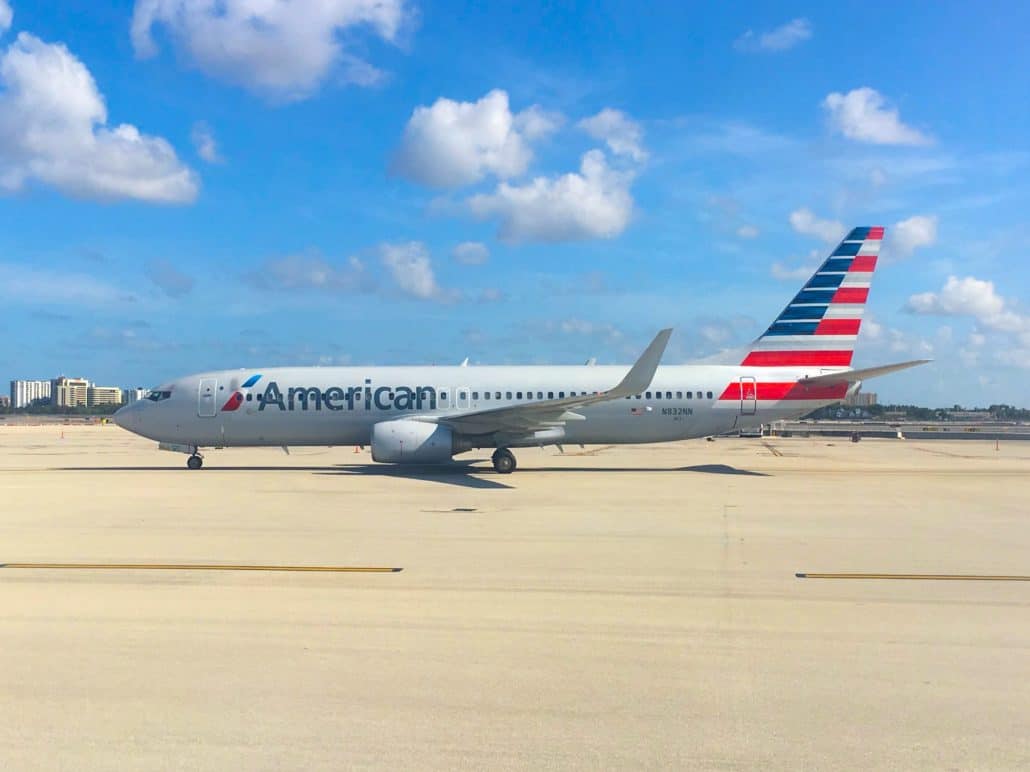 The problem? Over the years, airlines have become very savvy as to what ships are coming into which ports. And while they have no way of knowing exactly how many of those embarking or disembarking passengers are going to be hopping on a plane, you can bet they’ve got a basic idea. They know which seasons are busiest for the cruise industry, and which are slower. They know when the cruise lines will be able to demand top dollar and when bargain hunters will be seeking great deals… and they, like hotels in the vicinity of a popular port, set their prices accordingly.

But if you’re a cruise addict, you also know that there are always ways to find a good bargain or, at the very least, save some money on that premium-priced ticket. Here are some of the ways I’ve managed to land a cheap pre- or post-cruise flight over the years.

1. Use a Flight Consolidator

It’s amazing to me how few people take advantage of — or are even aware of — flight consolidators. These are basically brokers who buy seats in bulk from various airlines, then resell them, often to travel agents who specialize in discount international travel. There are some public flight consolidators, but most of the best deals available can be arranged through a travel agent. 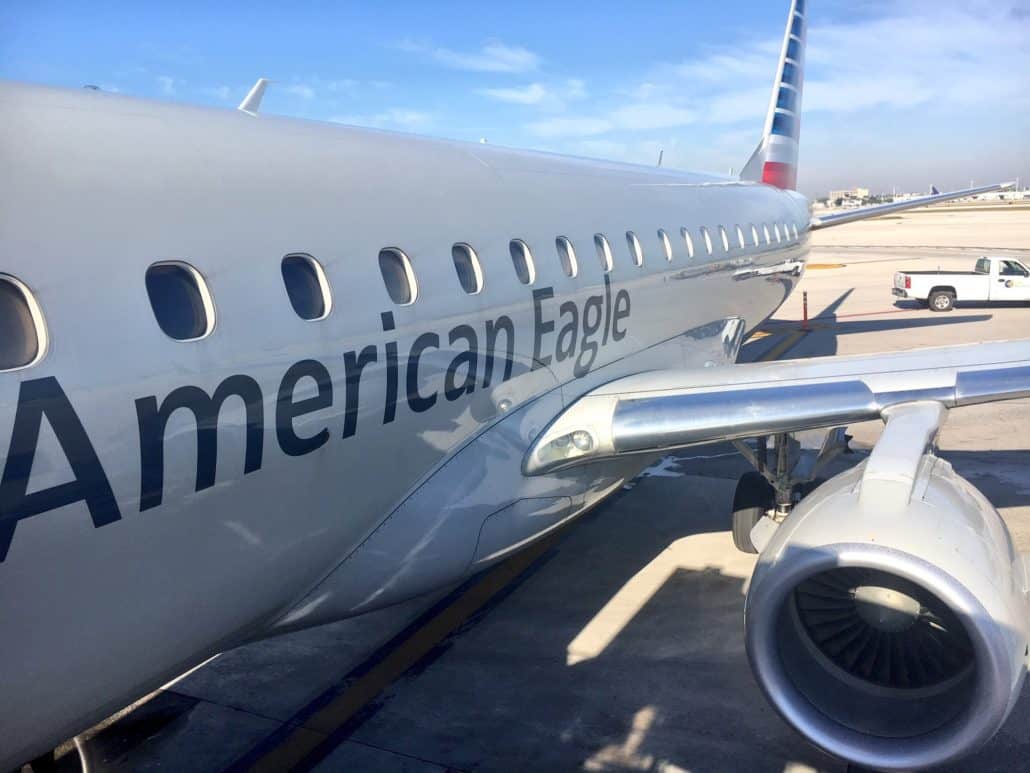 For years, I didn’t even think about using a consolidator because I’d heard horror stories about them. But in 2013, when looking to cruise out of Barcelona, I decided to bite the bullet and give a consolidator a try. By doing so, I saved over $1,000 and realized that sometimes, you have to experience something for yourself as opposed to listening to what other people have to say.

Some of the consolidators have negotiated fares that are often as much as 50% off of the published fare. For example, I have a cruise booked this spring which sails out of Barcelona. Wanting to save some money, I began looking at my options when it came to flying to the port of departure. The first place I looked was American Airlines (because I have their credit card and get double points). As the screenshot below shows, their flight was going for over $3,000.

Through my travel agent, I looked at rates from a consolidator named Centrav. Guess what? I was able to get basically the same flight for $438. (Plus, there was an additional discount if you paid cash for the ticket!) If you’re following closely, or even not-so-closely, you’ll realize that’s a savings of over $2,500 on just this single ticket! 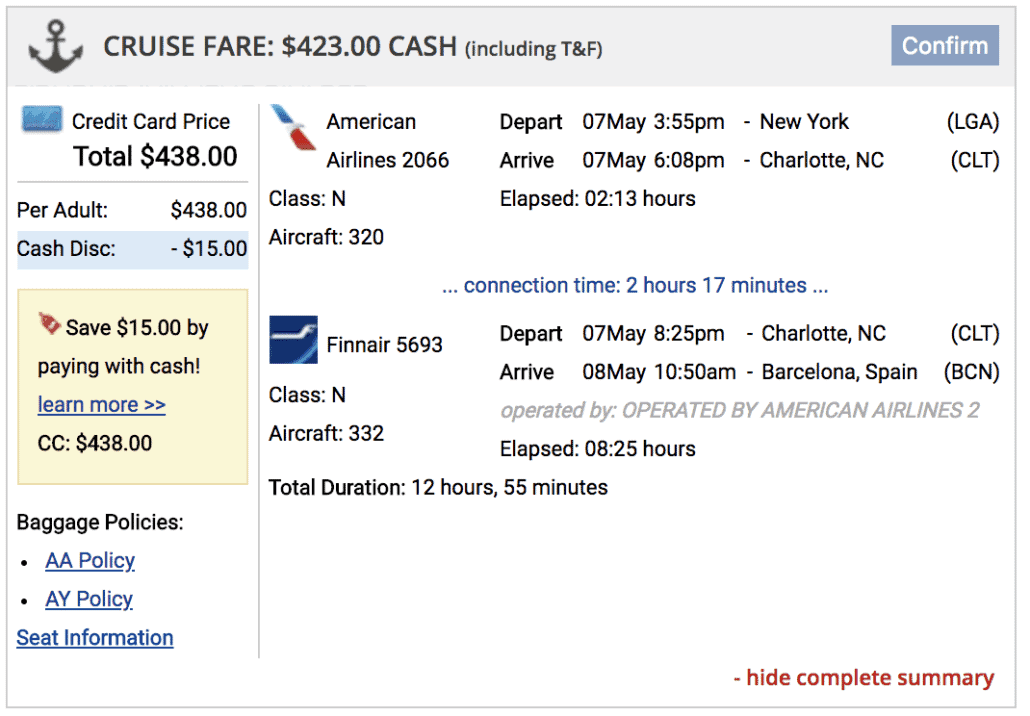 Of course, as with any time you buy a ticket — no matter who you purchase it through — you need to make sure you’re aware of all the conditions and restrictions. For example, when purchasing through a consolidator, you might not be eligible for credit card bonus points. But given how much you can save, that might not be a big issue.

Often, there’s more than one option of airports within a reasonable distance from the port. For example, if sailing out of New York City, you can fly into LaGuardia, JFK, or even Newark.  And if you’re sailing out of Miami, it might be cheaper to fly into Fort Lauderdale – or vice versa. Of course, you also have to factor in how you’ll be getting from the airport to the port. Will you need to rent a car? Are there shuttles or some other form of transportation readily available, and at what cost? Heck, do you have a friend who wouldn’t mind playing chauffeur? Depending on the port and the airline, some cruises might offer transfers for a nominal fee.

This handy Google feature basically allows you to enter information on when and where you want to travel, then compiles a list of the best rates available. Better still, it gives you the ability to track prices and receive an email when the prices drop.

While I’m a big fan of Google Flights, it’s important to note that they do not list prices on Southwest flights. They do list what flights Southwest has available and information on those flights, but not pricing information.

Look, I know it’s very tempting to linger on disembarkation day. You want to have one last breakfast or maybe wander around snapping a few final pictures of the ship. But if you’re willing and able to get off the ship early (especially if you have priority disembarkation), it increases your chances of getting a cheaper flight. Earlier flights are almost always cheaper than those later in the day.

Look at this screenshot showing the difference between a 10 a.m. flight and one leaving just an hour later.

But of course, this comes with a huge caveat: You absolutely, positively have to leave yourself enough time to get off the ship, get through customs (if necessary), and to the airport. Another option is to consider leaving late in the day or in the early evening. Again, because most people want to fly out in the late morning and early afternoon, those are the flights which will wind up costing you the most money. It’s the law of supply and demand in action!

If you find a great price in the evening but don’t relish the idea of spending the idea hanging out at the airport, you can often purchase daytime access to a hotel room at a discount. There are several sites through which you can book this type of thing.

The app I turn to most often is DayUse.com. Enter the city in which you’re going to be spending the afternoon and the date. The app then generates a list of available hotels and tells you how much it will cost you to spend a certain number of hours there. For example, a room might be available from 10 a.m. until 3 p.m. for $99. And depending on your budget, isn’t it worth spending $100 not to sit in the airport all day?

5. Bundle Your Airfare and Cruise For A Better Rate

Cruise lines have bulk buying power when it comes to airfare. The savings can be hit or miss, but it’s worth doing a little research to see if it works out in your favor. One major bonus of booking your flight through the cruise line: It guarantees that you will get to the ship if you’re delayed by weather or a mechanical reason. 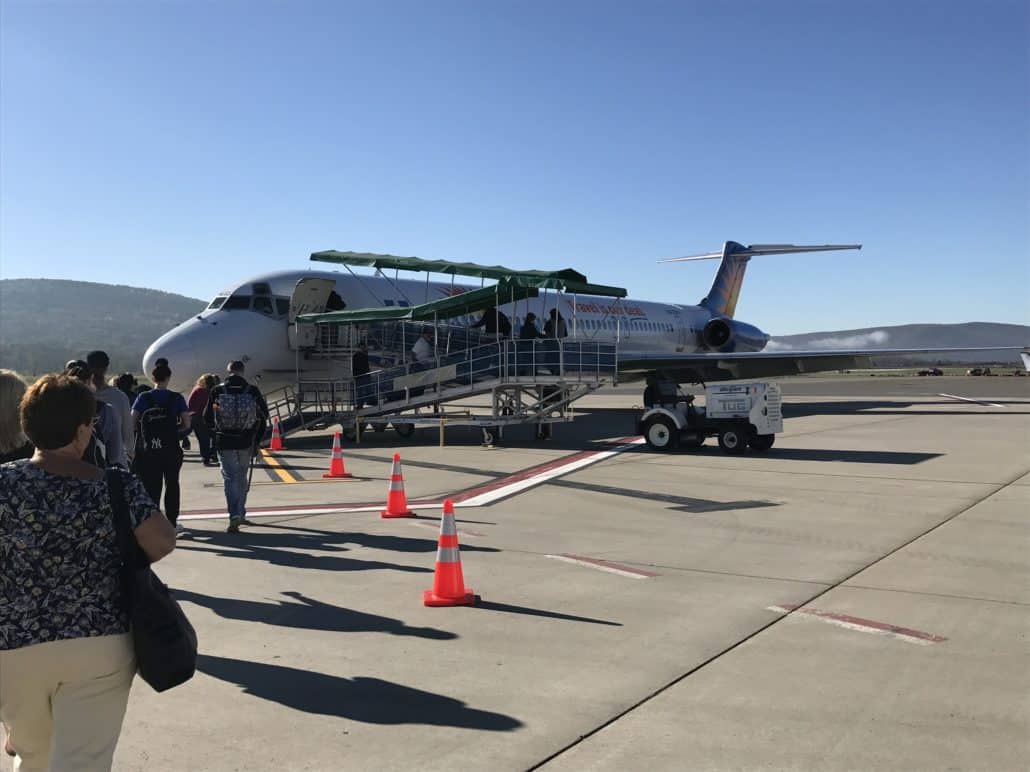 Say what you will about low-cost airlines, but they offer affordable pricing in most cities. Sometimes it will be a smaller airport outside of the major city, but if you can save a few hundred dollars — and when traveling with a family, those ticket prices add up! — it could be worth it. Keep in mind that low-cost carriers like Allegiant, Spirit, and Frontier often charge extra fees for carry-on luggage and come with absolutely no perks.

It’s not for everyone, but if you’re looking for an economical way to get from point A to point B, it might be worth at least seeing what kind of rates you can get. Just make sure, as always, you know all the conditions and restrictions attached to the airfare so there are no surprises when you get to the airport.

7. Use an Airline Credit Card

A couple years ago I signed up for the American Airlines Advantage Citi Card. As a sign-up bonus, they gave me 50,000 airline miles. If you book your reward travel far enough in advance you can get a round-trip domestic ticket for 25,000 miles (plus $11 taxes). Which means my sign-up bonus was basically worth two free trips. Now of course, every credit card’s offers, point-plans, and redemption structures are going to be different so, like with everything else we’ve talked about here, it’s important to know what you’re signing up for.

If you know anything about me, you know I’m a big fan of Dave Ramsey… who regularly preaches about the evil of credit cards. However, if you pay it off every month and make it work for you, I don’t see anything wrong with that. My card has a $95 annual fee, although others have no fee at all.

How do you save money on your cruise airfare?

Send this to a friend
Hi, this may be of interest to you: How To Find Cheap Flights For Cruising. This is the link: https://cruiseradio.net/how-find-cheap-flights-cruising/