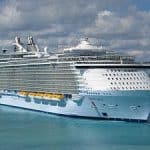 Royal Caribbean is sending one of their biggest ships, the 5,400-passenger Oasis of the Seas, to Europe in 2014 — but only for an abbreviated season. This follows an announcement earlier this month where eight Royal ships will be based in Europe next year.

Oasis of the Seas will depart on a 12-night Eastbound cruise from Fort Lauderdale to Barcelona on September 1, 2014 and a 14-night sailing from Rotterdam to Fort Lauderdale on October 14.

While in Europe Oasis of the Seas will offer two five-night Western Med sailings and a seven-night Barcelona to Rotterdam sailing.

While in Rotterdam, Oasis of the Seas, will go to Képpel Verolme shipyard for routine maintenance.