The first Disney ship to sail the St. Lawrence, Disney Magic, arrived in Québec City yesterday. Passengers were welcomed to the port by over 5,000 residents and officials. Captain Mickey waved to the fans as the ship pulled in to the pier. To celebrate the event, the evening sky was filled with fireworks as both cruise ship passengers and residents alike were treated to a magical display, fitting for a Disney celebration.

The 2,713-guest Disney Magic is in port from September 26 to 28 as part of its new itinerary sailing between New York and Québec City. The voyage offers two full days in the capital, giving visitors multiple days to experience the city. As part of the new sailings, the ship will also stop at other Canadian ports new to Disney – Saguenay and Baie-Comeau. 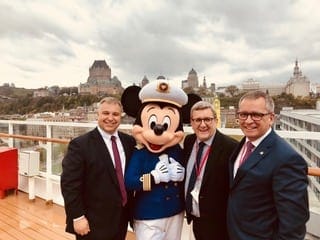 The 2018 season has seen record deployment with eight ships making inaugural calls to Québec. The Port of Québec was recently named one of the top three cruise ports in the world by Seatrade Cruise Global.

The city is known as the most European city in North America, is a designated UNESCO Heritage site, and a highlight of Canada/New England cruises.

For information on what to do in Québec while visiting, click here.

Hi, this may be of interest to you: Québec City Welcomes First Disney Ship. This is the link: https://cruiseradio.net/quebec-city-welcomes-first-disney-ship/