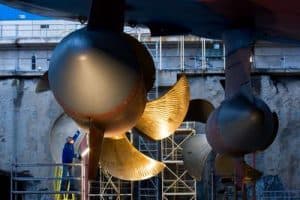 The azipods from Oasis of the Seas. (photo: ABB Group)

Royal Caribbean’s two new 158,000-ton cruise ships will have a new energy efficient Azipods when they are delivered fall of 2014 and spring of 2015. ABB, a leader in azipod propulsion has received the orders for both ships, totaling $60-million.

Azipod units (pictured right) act as both the ships thrust and rudder, giving the ship 360-degree control, compared to tradition vessels that have a rudder to steer and separate propeller for propulsion.  The new azipod units will provide better maneuverability and less fuel.

“We are pleased that as the cruise ship market rebounds, a number of shipbuilders have chosen our market-leading Azipod propulsion systems for the next generation of cruise vessels,” said Veli-Matti Reinikkala, head of ABB’s process automation division.

The two Project Sunshine ships are being built at Meyer Werft shipyard in Papenbury, Germany.

Norwegian to homeport upcoming cruise ship to Miami in 2014