Long before Carnival Cruise Line thought about putting a roller coaster on top of a ship, they toyed with the idea of a monorail. Although the Carnival Pinnacle never came to pass, elements of the ship clearly influenced the direction in which the company — and indeed, the industry itself — would soon be heading.

This Never-Built Ship Predicted The Future Of Cruising In reading about the Pinnacle Project, it’s important to note that the 200,000-ton ship was being discussed and designed back in 2004.

At that time, the world’s largest cruise ship was the RMS Queen Mary at 148,528 gross registered tons.

But had she come to fruition, Pinnacle would not have simply been the largest ship at sea. She’d also have featured a plethora of features unheard of at the time, including a few which are still pipe dreams.

It should surprise no one that a lead designer of the Pinnacle Project was Joe Farcus, the creative genius whose name was synonymous with Carnival Cruise Line for many years.

“There is no individual who has had a more profound impact on cruise ship design,” said Carnival Corporation chairman Micky Arison in the forward to Farcus’ book, Design On The High Seas.

In that book, Farcus describes the never-built ship — which was also known as Project Next Generation — and some of its over-the-top attractions.

“There were new features such as a mountain climbing grotto swimming pool,” he writes, “and a banked and curvilinear roller blade course around the ship and glass-faced funnels housing restaurants and other functions.”

Why The Ship Never Came To Pass 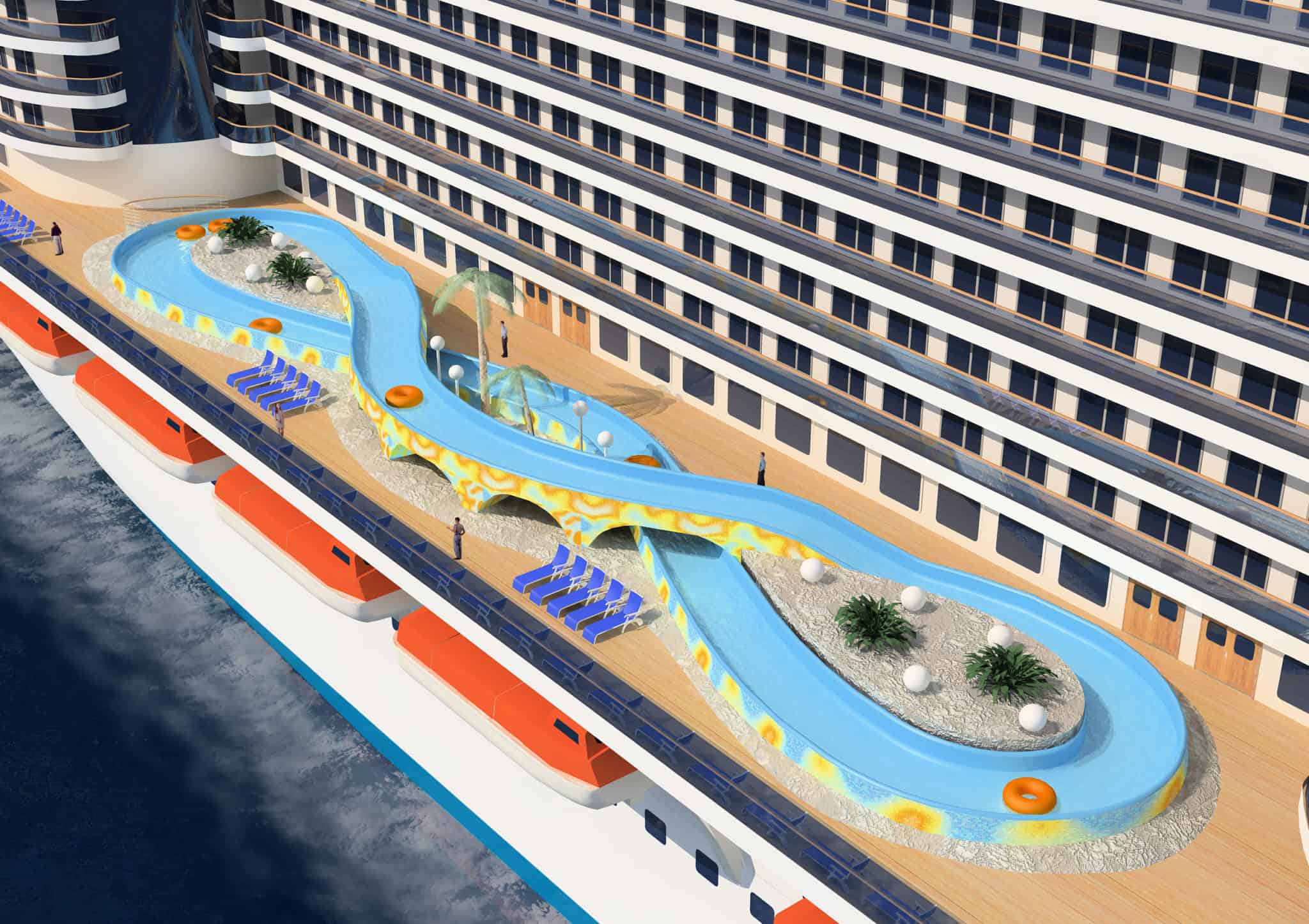 Jake Williams, host of the YouTube series Cancelled, tells the fascinating story, thanks in part to his exclusive sit-down interview with Farcus. And some of the details are as incredible as they are, in retrospect, incredible portentous.

Not only did the upper and lower levels feature a monorail-like system, but, as Williams describes it, there was also to be “vertical moving track [which would] carry cars between the two lines.”

In other words, something which would have served a similar function as the Magic Carpet found on the Celebrity Edge, but do so while transporting passengers.

Elsewhere, one of the ship’s lower promenade decks was to have included a lazy river. And the aft of the ship was to have featured two waterslides plunging down approximately 10 decks, similar to Royal Caribbean’s dry slide, the Ultimate Abyss.

And Pinnacle’s split-aft design has been echoed by several cruise lines in the years since. 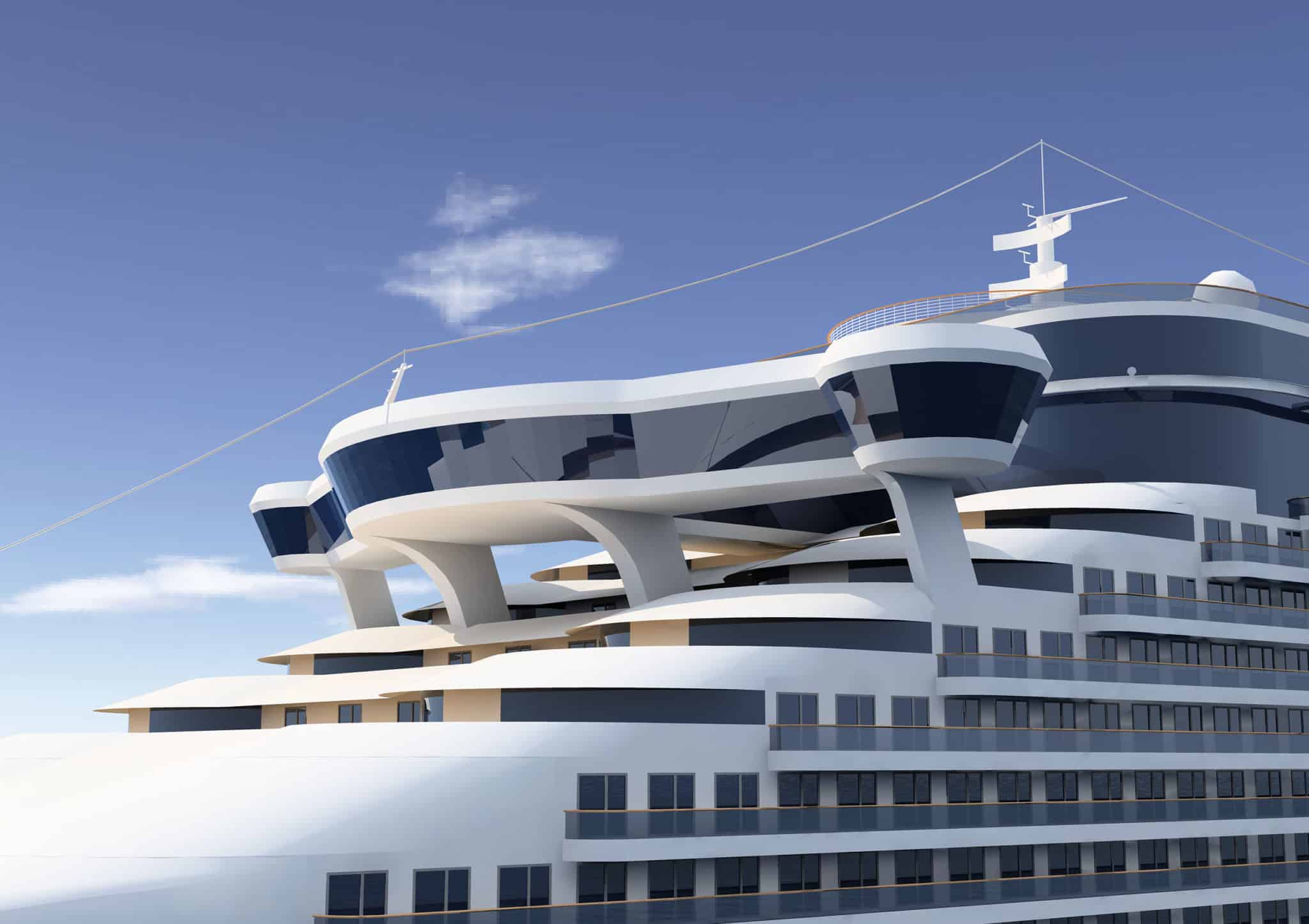 Unfortunately, numerous factors brought the dream project to an end, including the jaw-dropping price tag.

No one was more disappointed than Farcus, who told Williams, “probably my biggest professional disappointment [was] that that project wasn’t built.”

It did, however, very clearly spark ideas across the industry, influencing many of modern cruising’s most innovative features.

To watch the episode of Cancelled featuring Farcus discussing the Pinnacle Project, click below.

Travel Tips to Help You Make It Around the World

Send this to a friend
Hi, this may be of interest to you: The Incredible Carnival Cruise Ship You'll Never Sail. This is the link: https://cruiseradio.net/the-incredible-carnival-cruise-ship-youll-never-sail/