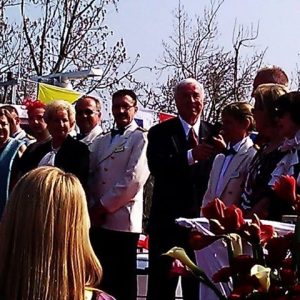 CEO of Viking River Cruises stands with the godmothers in France.

A lot of champagne is being consumed in Europe this week as Viking River Cruises is christening a total of 18 new 190-guest longships. It seems Viking keeps breaking their own record of river cruises christened, last year it was 10 new longship launches in Amsterdam.

Viking River Cruises are known for docking in the middle of small towns providing unique destinations and experiences for their guests.