With the Scarlet Lady‘s launch less than five months away, the first ship from Virgin Voyages passed a major milestone this week. Not only did the ship pass its first rounds of sea trials but, perhaps more importantly, it brought a big smile to the face of Virgin founder Sir Richard Branson as he toured the ship.

“The stereotype of a cruise ship is not something I particularly want to go on,” admits Brandon in a video released of him exploring the still-being-finished vessel. “So we thought, ‘You know, if we can create the kind of cruise ship that [we] and our friends would want to go on, then we’d go on it!’ And that, I think, is what the wonderful team at Virgin has done. They’ve created magic. Every corner you turn on the cruise ship, it’s literally magic.”

The ship also serves as something of a tribute to Branson and his many achievements in the industries which he’s shaken up over the years simply by taking them in bold new directions. From Virgin Records to Virgin Atlantic, the charismatic businessman is as known for his vision as he is his ability to look at things in a completely new way.

READ MORE: Everything We Know About Virgin’s Second Ship

“We’ve gone into quite a few different sectors in my lifetime, and I think surprised people and changed those industries for the better,” he reflects. “And I’m absolutely convinced we can do the same in the cruise, or what we call voyages, business.”

This Ain’t Your Grandma’s Cruise Line

Even before his first ship has officially launched, Branson’s cruise line has had a major impact on the industry. From the decision that the Scarlet Lady (and her upcoming sister, Valiant Lady) will be adults-only vessels to the announcement that every eatery on board would be included in the cruise fare, Branson and company have set out to be game changers in an industry once thought of as catering strictly to the blue-hair crowd. 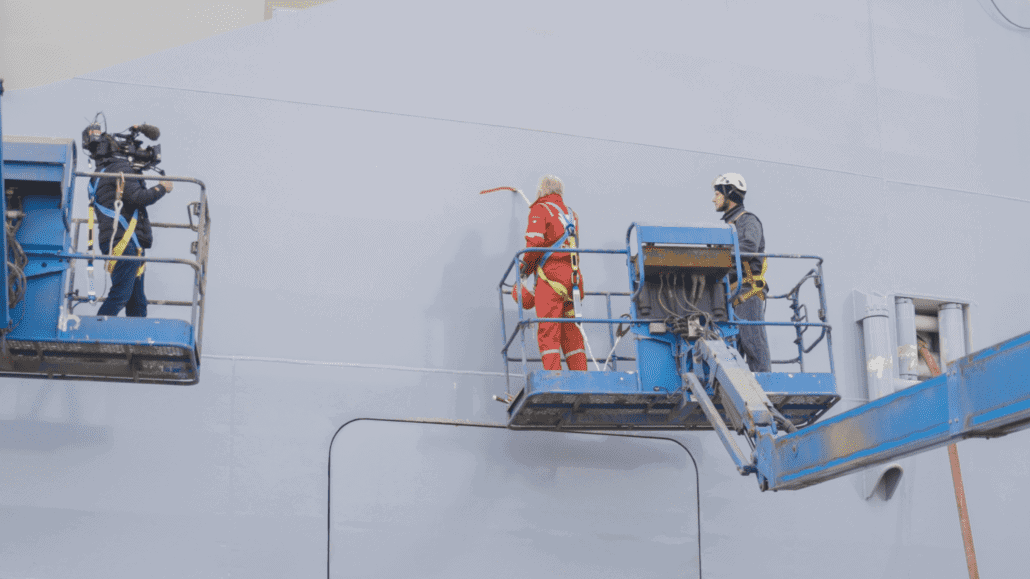 Branson did a bit of ceremonial painting, using Virgin’s signature red to outline where the logo will go on the hull.

“I think [the ship] will be incredibly well received by people who love what Virgin’s done in the past,” he says. Passengers — or sailors, as Virgin refers to their guests — will get their chance to check the ship out for themselves when she has her inaugural sailing on April 1, 2020. As you might expect, that initial sailing will feature celebrity guests, unforgettable surprises and more.

Send this to a friend
Hi, this may be of interest to you: Virgin Voyages' First Cruise Ship One Step Closer To Completion. This is the link: https://cruiseradio.net/virgin-voyages-first-cruise-ship-one-step-closer-to-completion/