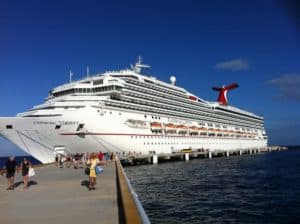 Carnival Corporation signed a commitment to invest in Mexico, within the framework of the National Agreement for Tourism. President Felipe Calderón Hinojosa witnessed the signing.

Cahill said that Mexico is an attractive destination for the development of tourist business and an important partner for Carnival.

President Calderón affirmed that tourism is an important economic generator, but more importantly, it is a source of higher-paying jobs. Tourism wages are 30 percent higher than the average job in Mexico. And the tourism industry hires more women than other industries.

Calderón emphasized that the federal government has set the goal of becoming the fifth-most-visited country in the world by 2015.

Secretary Manzo said that Mexico is living an historic moment for tourism. She said that thanks to the National Agreement of Tourism, Mexico has become a model for other nations, and that has been manifested in international fairs like Spain, Germany, Colombia and Brazil.

Cahill said his company has invested US$100 million in Mexico, and plans to develop two new projects, including a cruise terminal at Calica and another one in South Baja California. The new ports will generate more direct and indirect jobs in the tourist sector and will increase the arrival of cruise passengers to Mexico.

KISS to perform on Norwegian Pearl during theme cruise