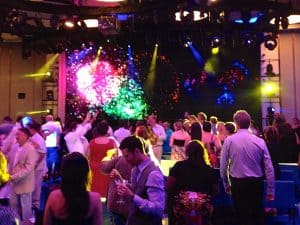 Liquid Lounge transforming into the nightclub on Carnival Sunshine.

Over the years I’ve seen some pretty cool nightclubs on cruise ships. From being down in the belly of Allure of the Seas to dancing the night away on the outside deck at Norwegian Breakaway’s Spice H20. But tonight I experienced something cool and innovative that worked flawlessly. I’m talking about the Liquid Lounge on Carnival Sunshine.

Liquid Lounge is the old show theater from Carnival Destiny that has since been redesigned to make a two-fold venue. During the refit the show lounge actually decreased in size (down to an 800 seating capacity)  but the frequency of the shows and performances increased so no guest will miss out on a performance.

By day the Liquid Lounge is a place to learn about excursions, Hasbro, The Game Show; shore talks and a meeting place. At nighttime Playlist Productions takes over and has passengers singing and on their feet throughout a musical journey in time.

The magic takes place after the last Playlist Productions show. Tonight it happened to be Motown show that ended at 11pm. When the show was over everyone was on their feet, the chairs slowly disappeared and the Liquid Lounge very quickly transformed into a South Beach like nightclub, complete with high-tech lights and a professional DJ.

You may be wondering but how a two-story theater can be used for a nightclub? They have a curtain the drapes over the second tier so only the ground floor of the club is open. They have plenty of horseshoe couches and a unique bar menu just for the Liquid Lounge.

This venue once again shows that Carnival Sunshine is destined for guest success and has made a pretty flawless transition.

Carnival Sunshine, Behind the Name