Carnival Cruise Line held a benefit recently for Kids in Distress of Broward and Palm Beach counties.  The Fort Lauderdale Improv was transformed into the cruise line’s Punchliner Comedy Club for the night as part of a special fundraiser that raised over $12,000 for the cause; a 20% increase over the amount raised last year.

The funds will be used to aid Kids in Distress, a nationally accredited agency working toward the prevention of child abuse, preservation of the family, and the treatment of neglected and abused children. 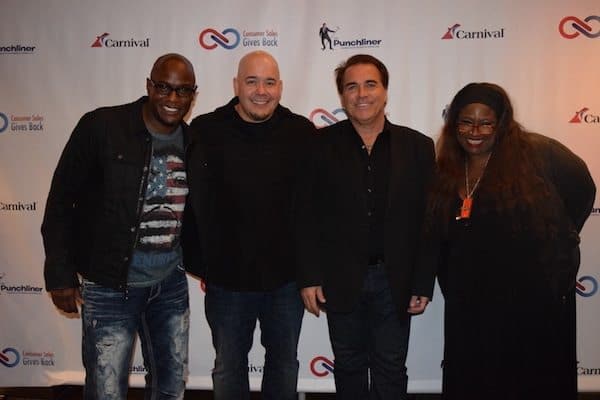 Hosted by Eli Rodriguez, one of the company’s sales coaches who is also a comedian, and sponsored by Carnival’s Global Contact Center, the evening feature hilarious sets by four of Carnival’s most well known comedians; Jas Blanchard, Vince Morris, Pat Godwin, and Thea Vidale.  They have entertained guests in Carnival’s onboard comedy clubs as well as venues across the country.

Carnival’s Punchliner Comedy Clubs are featured aboard all 24 of the line’s fun ships, with a lineup of laughter-inducing men and women each voyage.  It’s estimated that the club hosts upwards of 20,000 shows a year fleetwide.

Oasis of the Seas Receives an Onboard Tiffany & Co.