As Disney Cruise Line continues to slowly trickle out new information on its upcoming ship Disney Wish, today it revealed details on the experiences kids and teens can expect just for them onboard. 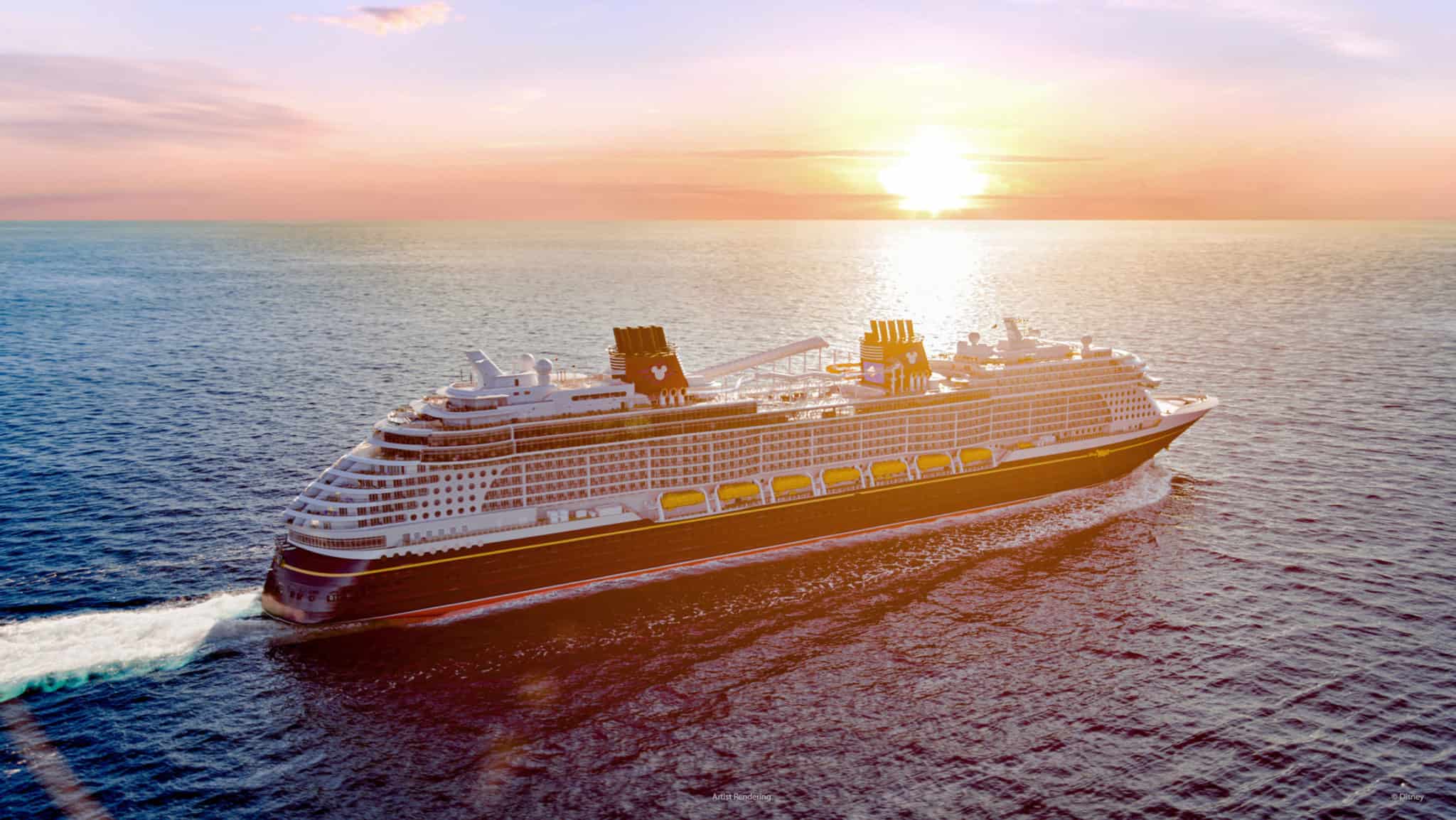 “With even more spaces, stories and characters than ever before, the stage is set for a line-up of truly remarkable new experiences for children aboard the Disney Wish,” said Jim Urry, vice president, entertainment and port adventures, Disney Cruise Line.

“We’re combining renowned Disney entertainment, expertly developed programming and imaginative storytelling to put kids in the center of their own adventures right alongside some of Disney’s most beloved characters, like Mickey Mouse, Chewbacca, Black Panther, Rapunzel, Belle, Anna and Elsa, and more.”

The peculiar creatures and legendary characters of the Star Wars galaxy will take center stage at Star Wars: Cargo Bay.

This first-of-its-kind experience will place kids in the important role of creature handlers as they learn to manage a mischievous menagerie of exotic beings from across the galaxy, such as porgs, Loth-cats, worrts, and more.

Throughout the cruise, they’ll use augmented reality-enabled datapads to track and study the creatures on a series of special assignments. But there’s more to this job than meets the eye: the new crew will actually be joining an important mission to deliver a pair of secret stowaways — Rey and Chewbacca — back to the Resistance.

During the “Star Wars: Creature Challenge,” kids will be put to the test as they help feed the lifelike creatures and encounter some of the most dangerous beings in the galaxy. They’ll need to call on the expertise of Rey and Chewbacca — and even channel the Force — to secure the ship from destruction.

Specially designed for the youngest sailors at Disney’s Oceaneer Club, Mickey and Minnie Captain’s Deck is a nautical playground inspired by the colors and icons of Disney Cruise Line. The space will be filled with maritime-themed physical and sensory-style games and activities, such as pipe slides and crawl-throughs, ship’s wheels, “busy boxes” fashioned as ship controls, and cushy life preserver seating areas.

At select times throughout the cruise, the space will be open to little ones’ families for group play, and toddlers from It’s a Small World Nursery will also get access to explore, learn, and play there with Mickey and Minnie.

The signature experience here will be “Minnie’s Captain Academy,” a high-energy training session for kids to exercise their bodies through games, dancing, and maritime “drills,” and their minds through a series of STEM-inspired challenges. 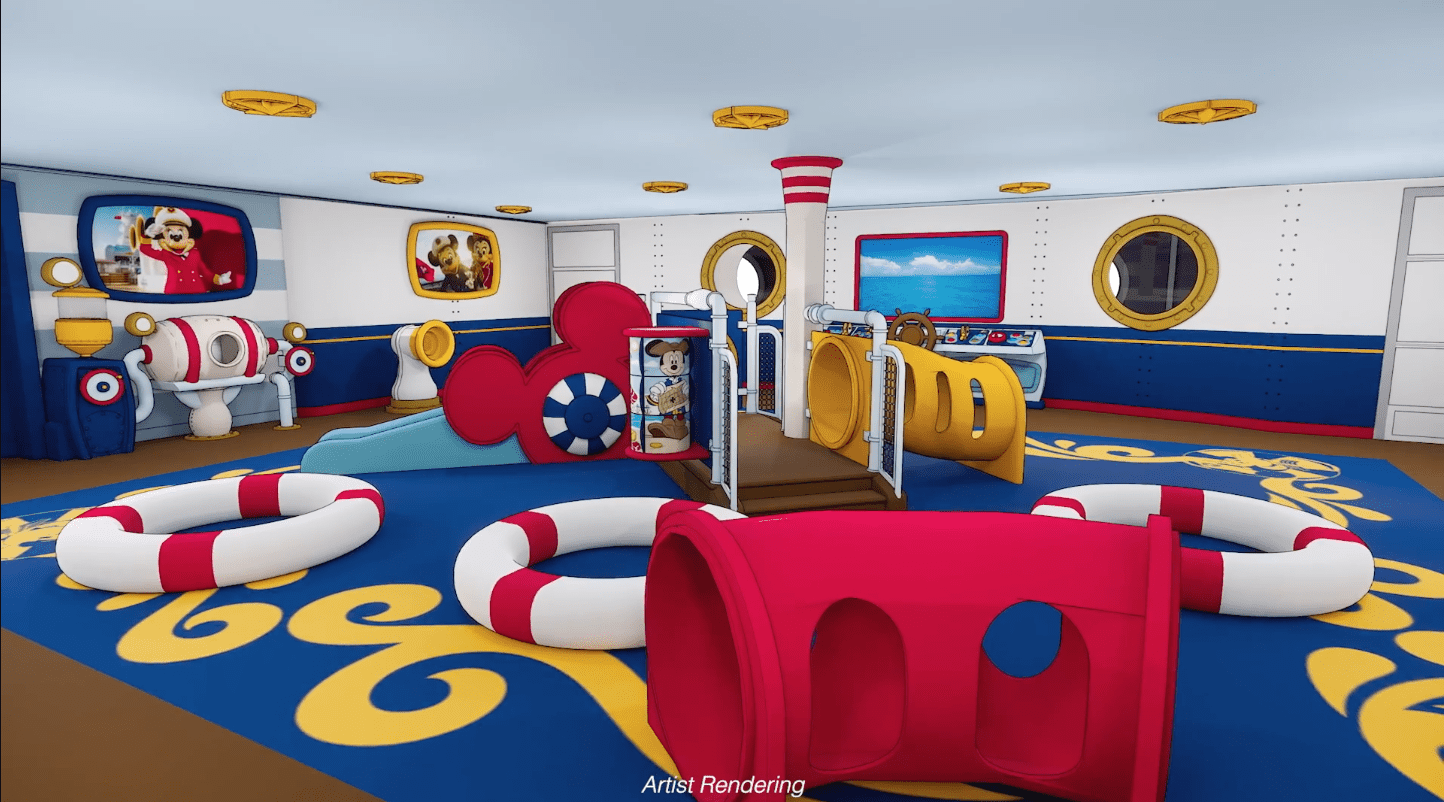 As previously announced, other spaces within the kids’ Oceaneer Club on Disney Wish will include Marvel Super Hero Academy, Fairytale Hall, and Walt Disney Imagineering Lab.

At Marvel Super Hero Academy, young recruits will join a hands-on training session with Ant-Man and The Wasp, who will teach them how to create and test their own Pym Particles, the technology that allows them to shrink and grow objects.

In Belle’s Library, kids will use their imaginations to create a new story for their favorite book lover. Belle will lend her wits and her magic mirror to help determine the characters, plot, and conclusion of the brand-new tale.

At Anna and Elsa’s Sommerhus, the newest citizens of Arendelle will join a special celebration of Queen Anna’s recent coronation by acting out the history of how she became queen, taking on the roles of characters like Anna, Elsa, Olaf, Kristoff, Hans, and more.

For tweens, the ship will feature Edge — a New York City loft-inspired club for those ages 11 to 14. This club will boast an indoor solarium area with a sunny overhead skylight effect, carpet patterned with grass and daisies, a mural of a blue sky, and games inspired by a colorful outdoor city park. Throughout, graphic art displays called “photo walls” will provide plenty of opportunities for tweens to capture cool vacation pictures. 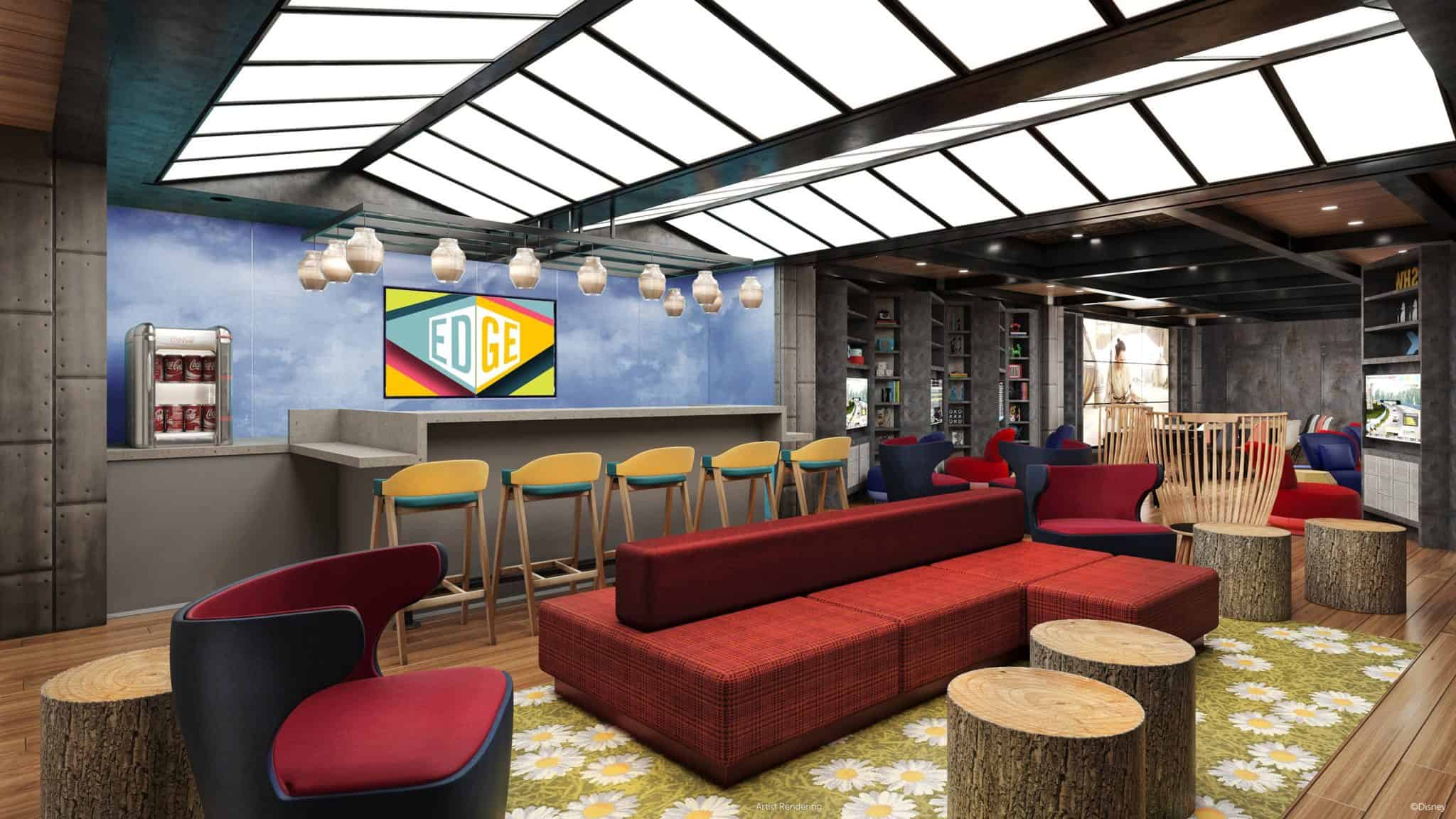 Wish will also feature a Parisian artists’ loft-inspired club for teens 14 to 17 called Vibe. It will include regal French columns and paneled walls covered with whimsical pop art murals and colorful graffiti, a larger-than-life Mickey Mouse statue, and a traditional French Morris column plastered with Disney-inspired travel posters. The space is rounded out with floor-to-ceiling windows overlooking the ocean. 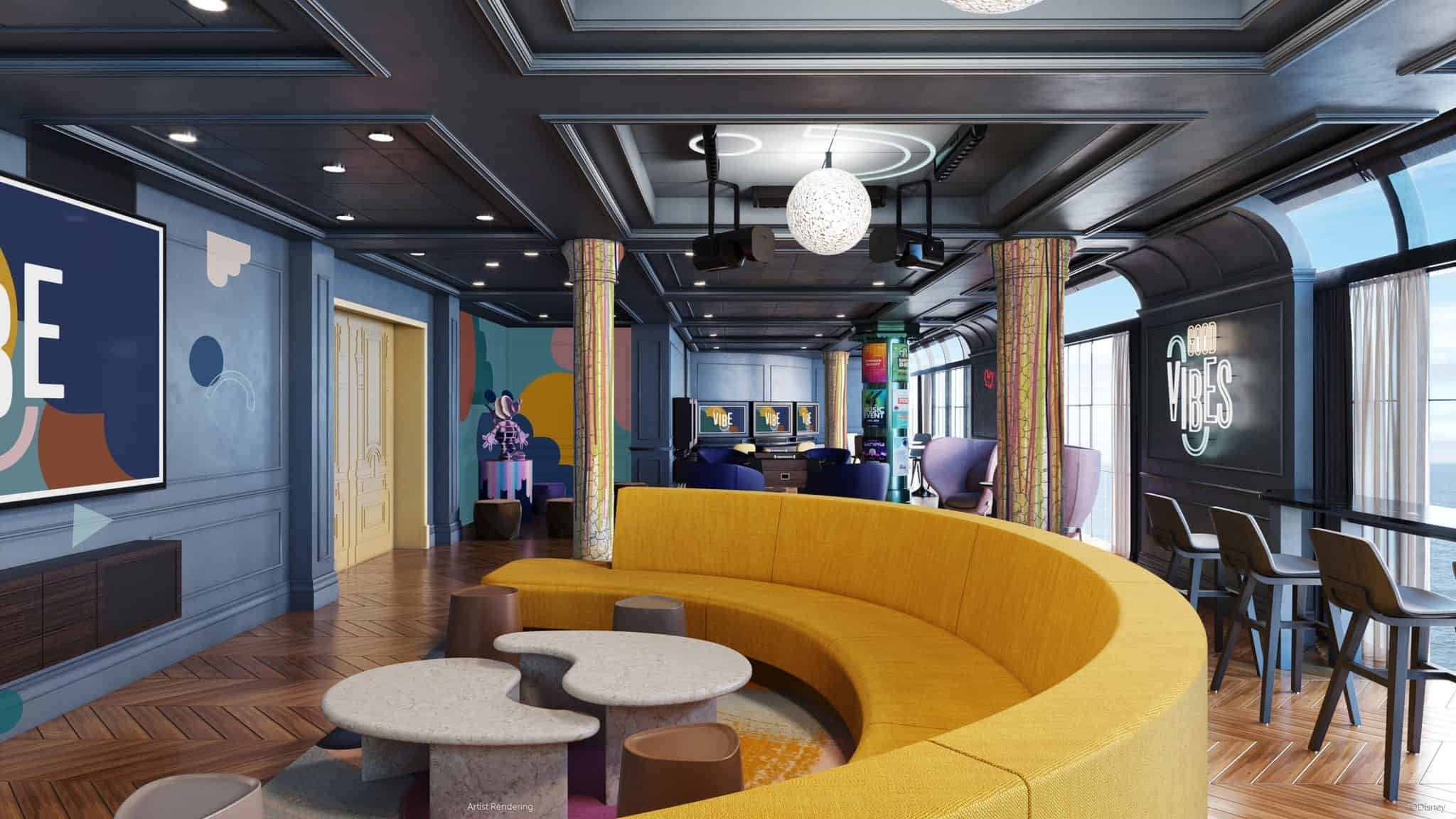 Both Edge and Vibe will offer a main lounge space with cozy furnishings, an oversized LED screen, and plenty of room to hang out as a group.

And for the first time, Disney Wish will also feature a third club for teens and tweens: The Hideaway. This new hangout will offer older kids and young adults a place to relax and listen to music in a posh setting complete with a dance floor and DJ booth — perfect for karaoke contests and dance competitions.

The Hideaway will be adorned in a vibrant color palette , retro-inspired design details, and disco ball lights. Adjacent to Vibe, the flexible venue can be opened to the teen club, closed off for tween activities, and even reserved for passengers ages 18 to 20. 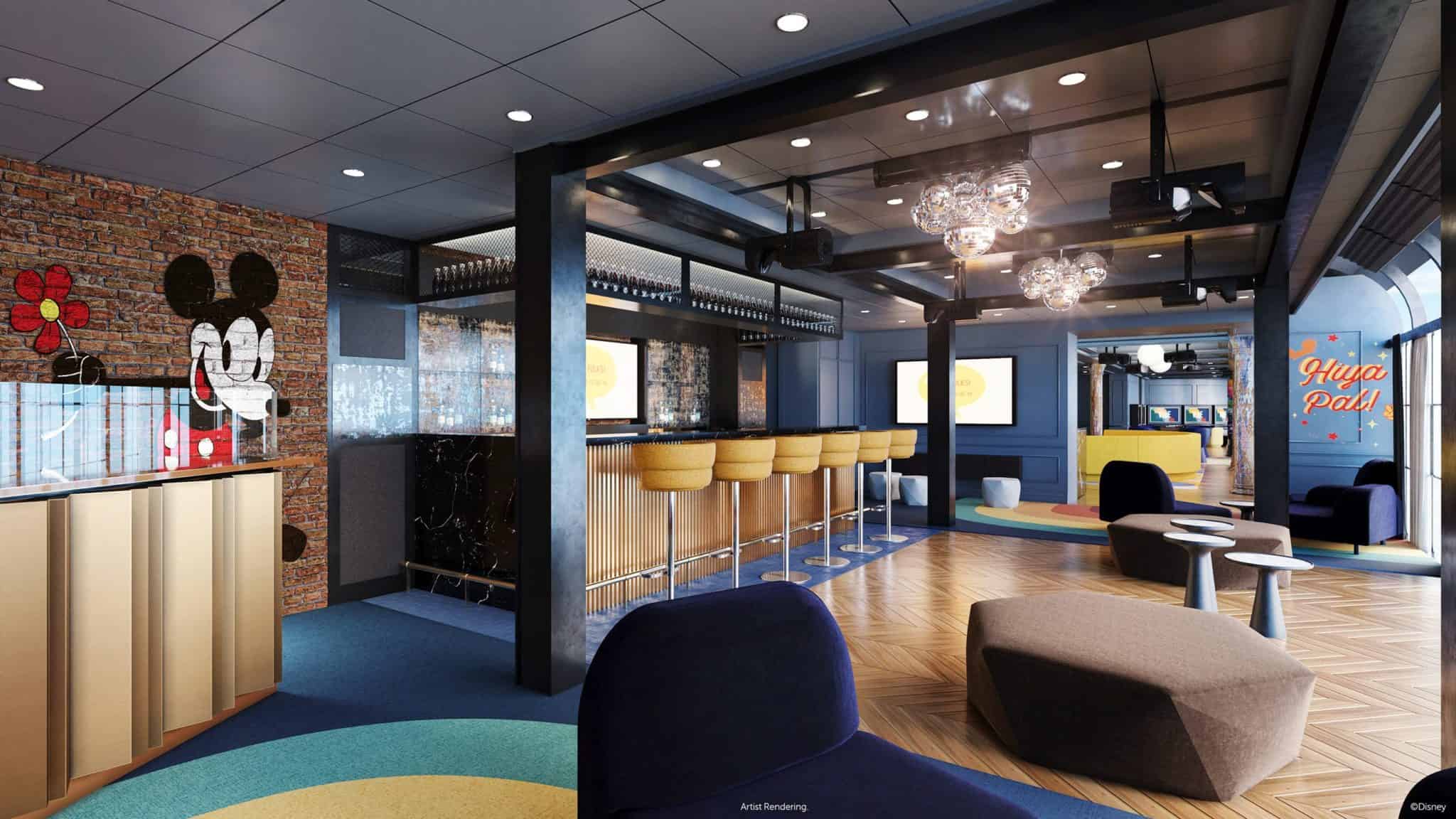 Each venue will include refreshments — Edge will have a soda bar, Vibe will serve soda and coffee drinks, and The Hideaway will offer smoothies.

Teens will also find scheduled activities just for them in other parts of the ship such as Hero Zone and Luna.

As previously revealed, babies and toddlers 6 months to 3 years old will be cared for at It’s a Small World Nursery, where babysitting services will be provided in a whimsical environment. Here, little ones will play games, make crafts, watch movies, read books, and spend time with Disney friends under the care of trained counselors.

Disney Wish will set sail on her maiden voyage on June 9, 2022 from Port Canaveral, followed by a season of three and four-night cruises to Nassau, Bahamas and Disney’s private island, Castaway Cay.

Send this to a friend
Hi, this may be of interest to you: Kids & Teens Experiences Revealed on New Disney Cruise Ship. This is the link: https://cruiseradio.net/disney-wish-cruise-ship-kids-teens-revealed/