The Grand Turk Cruise Center officially reopened yesterday with a visit from Carnival Ecstasy, part of the ship’s seven-day voyage from Charleston.   The festivities included a shipboard reception with the Carnival Ecstasy’s officers, executives from Carnival Corporation, and port and government officials. 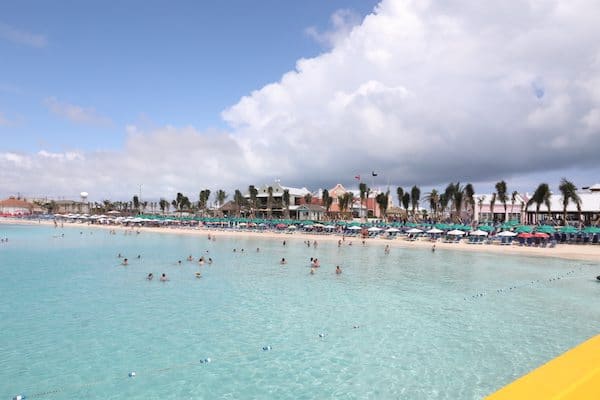 During Carnival Ecstasy’s day-long stop in Grand Turk, guests enjoyed the port’s wide range of amenities, including unique shopping and dining experiences and an on-site pool, as well as a variety of shore excursion experiences.   The island is also home to Splashdown Grand Turk, a unique exhibit commemorating the National Aeronautics & Space Administration’s Mercury space program and the historic 1962 splashdown of the Friendship 7 capsule off the coast of the island.

The visit from the ship is the first of dozens of calls going forward at the port, a $60 million facility opened by Carnival Corporation in 2006. The 20-acre complex features direct access to an 800-foot-long beach, swimming pool and FlowRider attraction, which offers body boarding and stand-up board surfing.

The cruise center serves as a gateway to the island of Grand Turk, which is world-renowned as a diving and snorkeling jewel, and also features magnificent beaches, striking aqua-blue waters, and a variety of watersports activities.  Exciting adventures like ziplining and all-terrain vehicle excursions are also available.

Send this to a friend
Hi, this may be of interest to you: Grand Turk Cruise Port is Back Open. This is the link: https://cruiseradio.net/grand-turk-officially-open-cruises/