Viking Ocean Cruises has been quite busy in the past few years!  It was not even a year ago that they introduced their very first ship, Viking Star, and marked the arrival of the industry’s first new cruise line in a decade.  Yesterday, the company welcomed their second ship, Viking Star during a celebration in Greenwich.

The ship was position in the Thames River, and is the largest ever launched in London.  During the new vessel’s christening ceremony, the cruise line’s senior VP and daughter of Torstein Hagen served as ceremonial godmother, offering a blessing of good fortune and safe sailing for Viking Sea.  Several aspects of the ceremony also paid homage to the company’s Norwegian heritage.  In honor of the original Vikings, a Viking battle axe was used to cut the cord for the aquavit christening.  Also, instead of champagne for the bottle-breaking, they used a bottle of Gammel Opland aquavit, which comes from Norway. 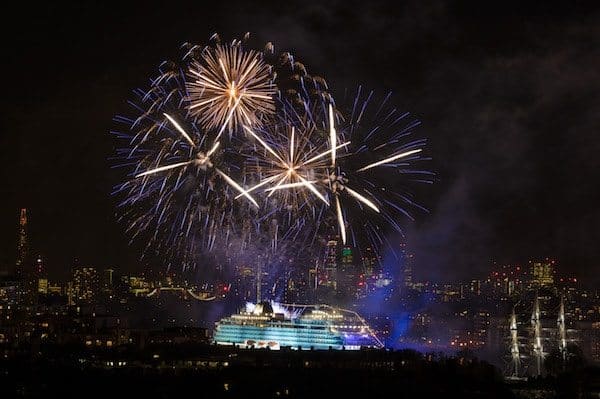 After the ceremony was a lively fireworks display, and today the shiny new ship set sail for Bergen on the popular 15-day Viking Homelands itinerary.  Her maiden voyage began on April 3 through the Mediterranean.

Viking Sea is 47,800 tons, and holds 930 guests.  The cruise line’s third and fourth ships are under construction and will debut in 2017.  Highlights of Viking Ocean’s fleet include:

Viking Sea will spend the summer sailing Scandinavian and Baltic itineraries, and will call in Greenwich again in June as part of the cruise line’s new Into the Midnight Sun itinerary that sails between London and Bergen.  From now to May 31, Viking is offering US residents a 2016 Special Savings Discount with free air from 150 cities, plus up to $1,000 off per couple.