Do I need a passport to cruise? While many assume that this is a yes or no question, it depends on where you’re going. 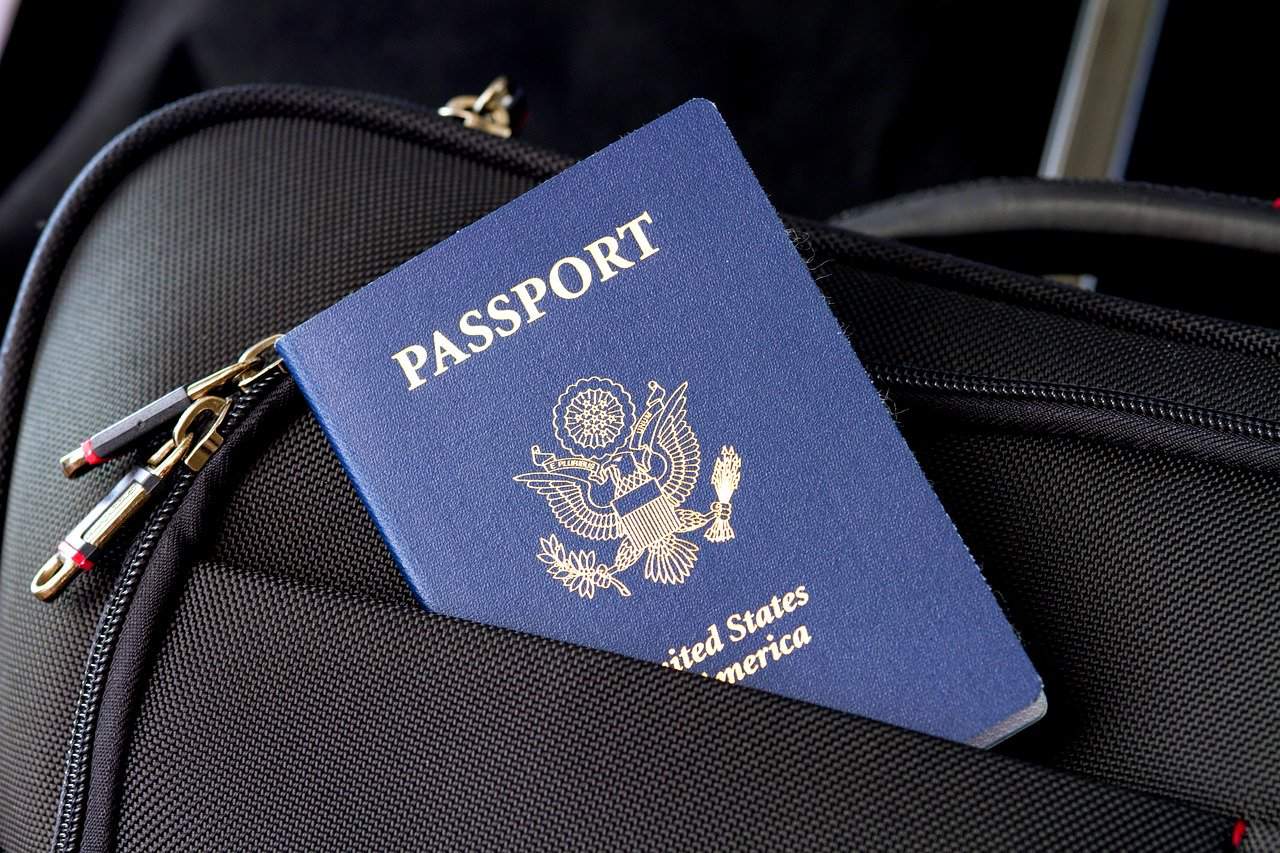 There are many varying factors that determine whether you’ll need a passport for a specific sailing.

However, if you ask a seasoned cruiser many will tell you that a passport is absolutely necessary and that no one should travel without one, no matter the cruise.

We agree with that sentiment, but first, we’ll break down all the rules and explain why we think you should cruise with one regardless.

Keep in mind these guidelines apply to U.S. citizens. For citizens of other countries, or those with other immigration statuses living in the United States, a passport is generally required for any cruise, and you’ll want to check with your travel agent or cruise line to confirm if any visas are necessary for your itinerary.

You Will Need a Passport For a Cruise If…

There several types of cruises that do require you to have a passport to sail. 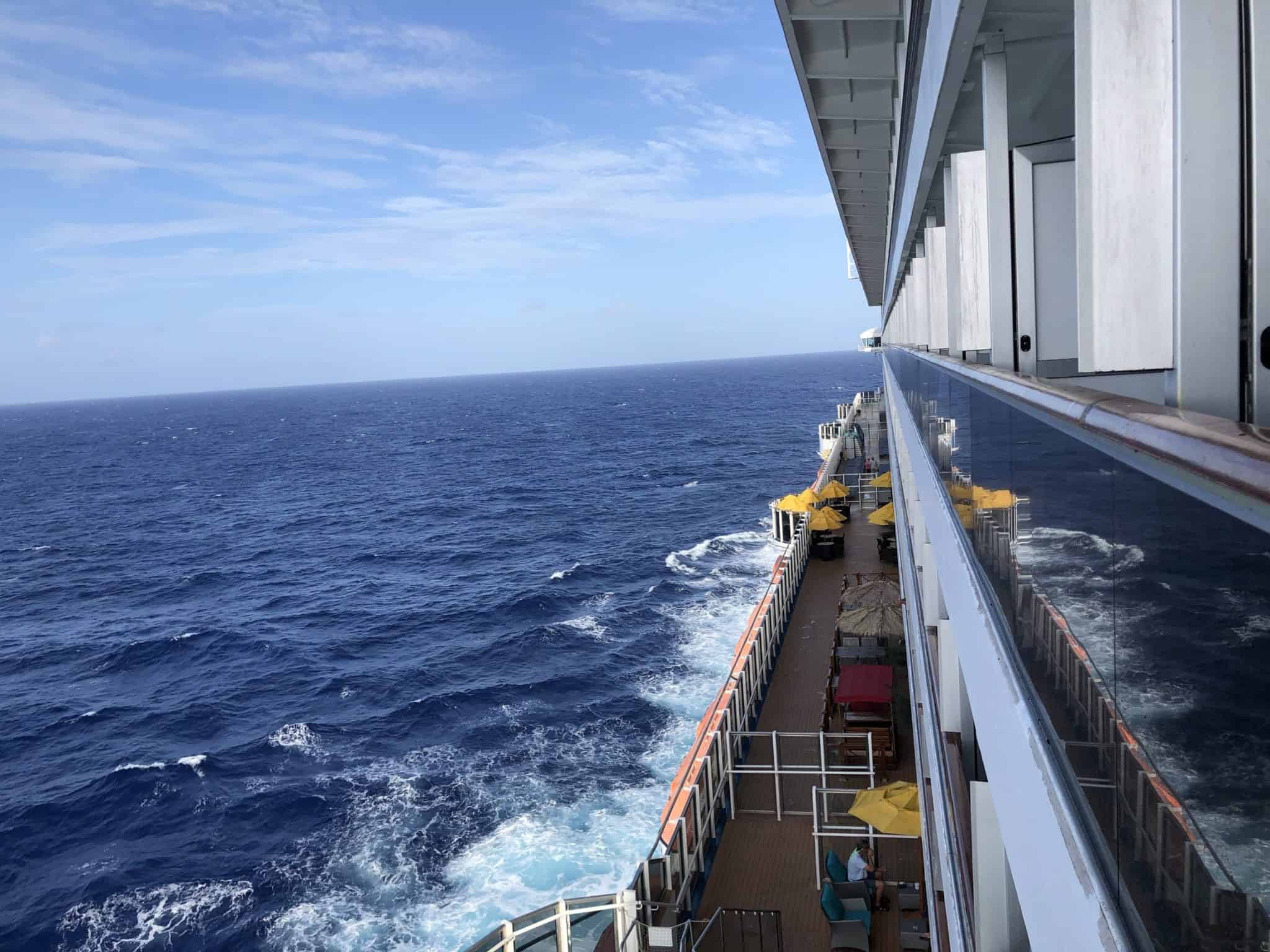 Those who enjoy sea days will get plenty of them on a transatlantic sailing.

One-way Cruises Within the United States/Canada

Open-ended or one-way sailings can be voyages that begin and end in different U.S. ports, and voyages that depart from a U.S. port but end in a foreign port or vice versa. This would include transatlantic or transpacific sailings, or even a repositioning cruise within the United States.

Example: a one way Panama Canal cruise from San Diego to Fort Lauderdale would require a valid U.S Passport. Or a one-way fall cruise from New York City to Quebec will require a passport.

Passports are also needed for cruises that embark and debark in foreign ports, meaning you’ll need a passport regardless if you plan to fly or drive in or out of the country.

Example: taking a transatlantic cruise from Barcelona to New York City would require a valid U.S. Passport because you’ll have to fly to Europe to board the ship.

You Won’t Need a Passport For a Cruise If… 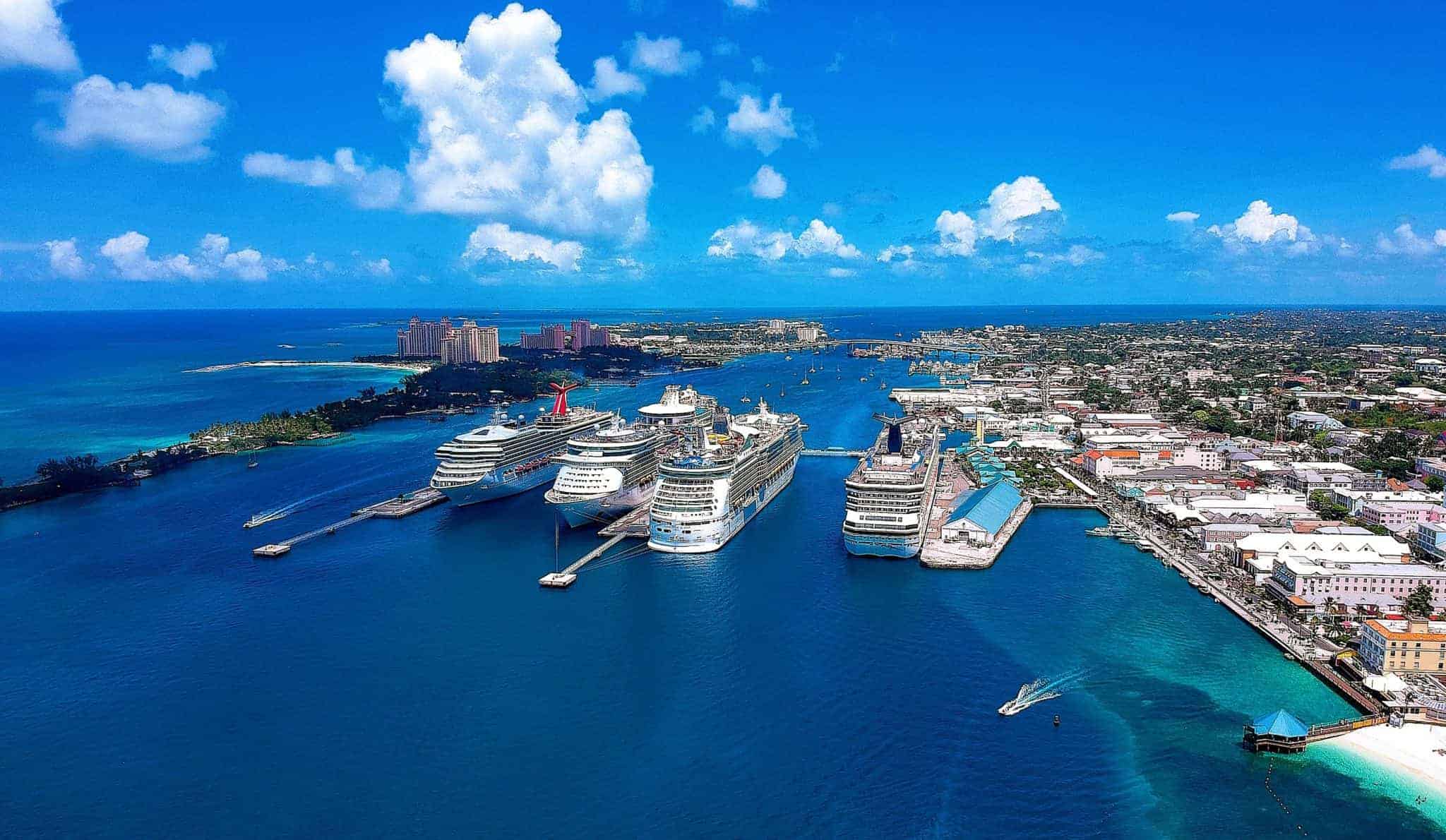 Nassau, Bahamas on a spring day.

United States law says that if you are a US citizen taking a closed-loop cruise, which begins and ends in the same port, from the United States, you don’t need a passport for the journey. Even though your cruise will visit a foreign port (because it’s required to), passports likely won’t be required to go ashore if the voyage meets the closed-loop requirements.

Example: A seven-night Western Caribbean cruise from Port Canaveral would not require a passport because you are beginning and ending the cruise in the same port of call.

This doesn’t mean you don’t need any type of identification to cruise. For those who decide to cruise without a passport on a closed-loop sailing, there are still required to bring the following type of documentation, an official state ID and an original copy of your birth certificate, in order to still be able to sail.

For most people, their official state ID would be their driver’s license. state ID card, or learner’s permit. As for the birth certificate, it’s important to stress that it must be an original or certified copy of the birth certificate, which has the raised seal branded into it. If you arrive at the terminal with a photocopy, you will not be permitted to sail.

A baptismal certificate or record is not acceptable documentation to sail.

There are rare instances where a port of call may require a passport to step ashore even if the cruise itself doesn’t require it, so be sure to double-check on these requirements ahead of time.

In 2019, the Caribbean island of Martinique requires everyone that gets off the ship to have a valid passport.

Places You Can Cruise Without a Passport 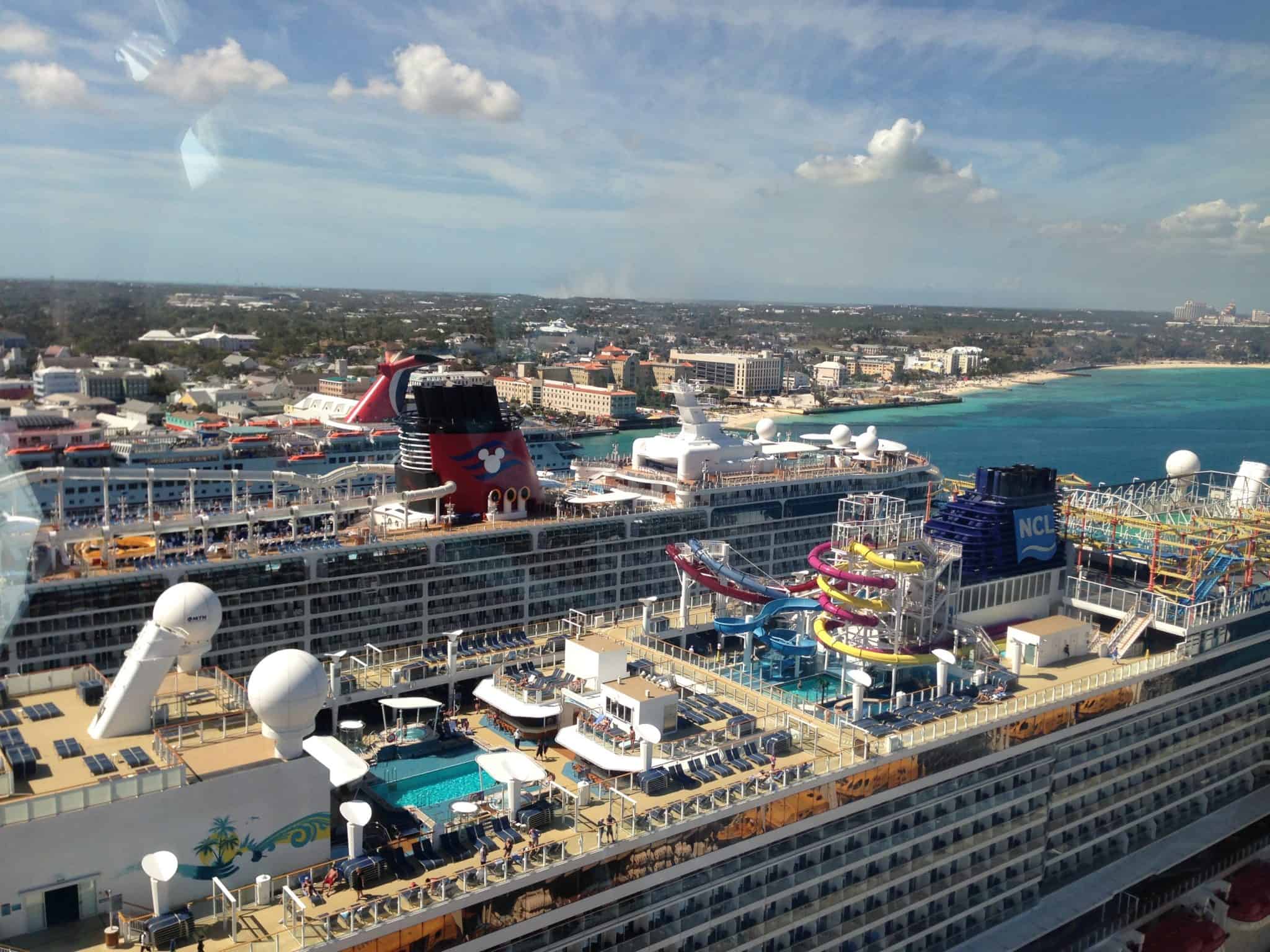 Before the shutdown, it wasn’t unusual to see numerous ships docked in Nassau at once.

Below are some regions that many closed-loop cruises sail from within the United States and do not require a passport.

Keep in mind that many cruise lines do offer open-ended or one-way voyages in all of these areas, so just make sure to be mindful when selecting an itinerary if you don’t plan to get a passport.

Regions You Won’t Need A Passport

If you’re taking an Alaska cruise that starts or ends in Vancouver, BC, you will need a passport to enter or leave Vancouver. Guests that do not have passports and want to go on an Alaska cruise should choose to sail from Seattle or San Francisco.

When you apply for your passport, you will have the option of getting a passport card. It’s important to know that you can use the passport card to reenter the United States at cruise ports of entry from Mexico, Canada, Bermuda, and the Caribbean.

However, if you are not able to return on the cruise ship for any reason, you will need a passport book to fly back to the United States.

Why You Should Get a Passport 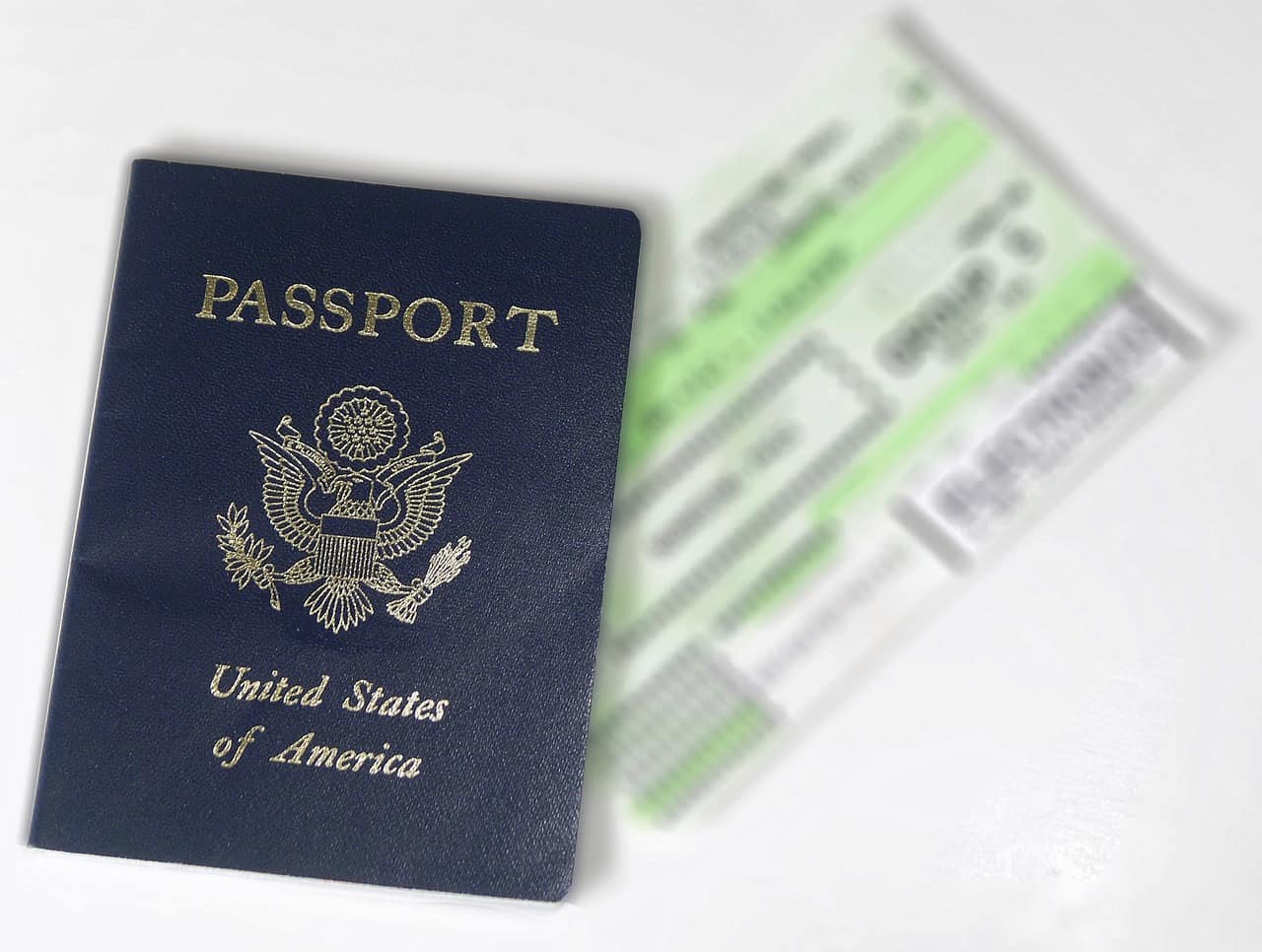 In Case of Emergency

Even though a passport isn’t required for the majority of sailings offered by cruise lines, unexpected accidents or emergencies do occur while traveling. For that reason, it’s better to err on the side of caution and get a passport regardless.

There are many scenarios that can play out, usually things that are beyond anyone’s control. What if someone you’re traveling with gets injured while in port and has to stay in a local hospital? What if you have to unexpectedly fly home from a port of call due to an emergency?

As previously mentioned, a passport book will be required to return to the United States. Most emergencies would be covered if you purchased a comprehensive travel insurance policy, some policies even cover the loss or theft of a passport (note: carefully read the explanation of benefits).

Getting Back To The Ship

Even something so simple as not getting back to the ship on time and getting left behind could be an issue without having a passport. Whatever the case may be, you’ll have to jump through a lot more hoops if you’re not traveling with a passport.

Being left in port will involve visiting the U.S. Embassy and acquiring a passport. On top of that, some embassies are located hours away from the cruise port.

READ MORE: What Happens When A Ship Leaves You In Port?

This is the main reason why many veteran cruisers and travel agents always advise first-timers to travel with a passport, even if they aren’t technically required to.

Another advantage of cruising with a passport is a quicker debarkation experience. In most U.S. ports, the fact of simply having a passport to present at Customs may cut your time in half.

Lastly, due to the REAL ID Act of 2005, many travelers will find that their driver’s license may no longer be compliant with federal travel regulations and soon won’t be acceptable forms of ID for domestic air travel. This could be a problem if you plan to fly to your cruise embarkation port.

While it’s yet to be seen how this will be resolved and how the cruise lines will address the issue, it can all be avoided by simply getting a passport.

Very rarely does a cruise ship have a technical problem where it has to disembark guests at a foreign port of call, but history has shown that it does happen. A cruise ending early in a foreign port would require a U.S. passport book to fly back to the United States. 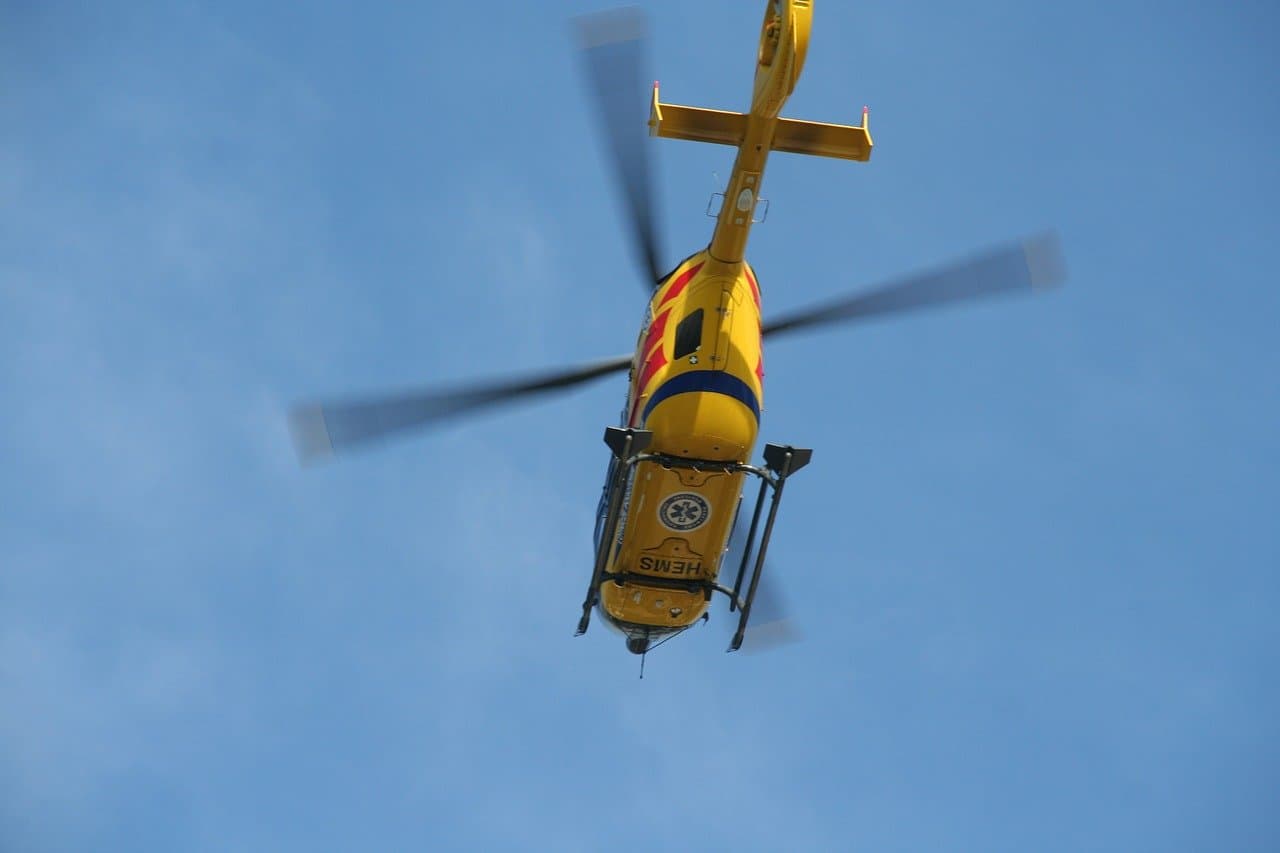 One of the main reasons why cruises are so popular among so many is because you don’t really need a passport to set sail. You’re able to visit a number of beautiful foreign destinations without the hassle and expense that come along with getting a passport.

The U.S. Department of State fully outlines the passport application process on its website.

Yes, the cost does add to the overall expense of the trip, especially if you have a family of four, but passports are valid for 10 years. It’s not something you’ll have to renew every trip or cruise and this small inconvenience may end up saving you from even bigger headaches in the long run.

Pin it for later! 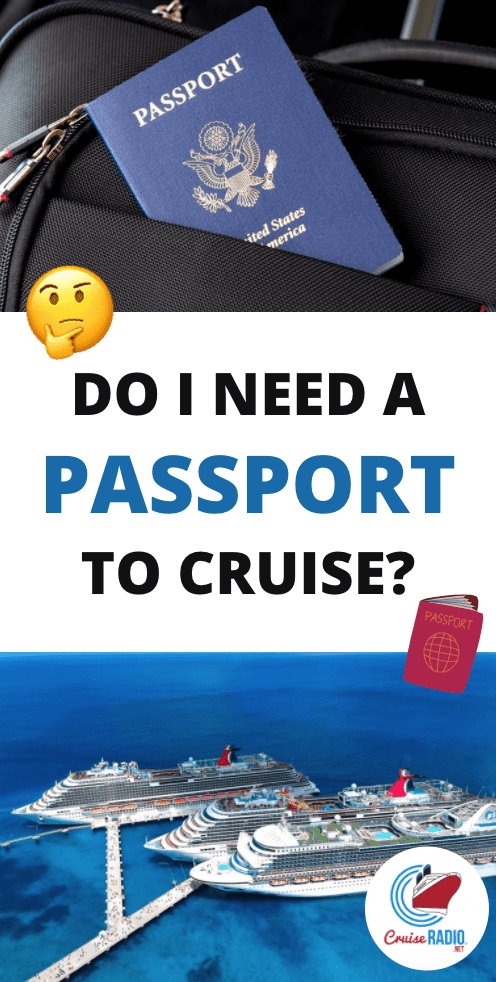 Alaska Inside Passage Cruises: What You Need to Know

When is the Best Time To Cruise Alaska?

Send this to a friend
Hi, this may be of interest to you: Do I Need A Passport To Cruise?. This is the link: https://cruiseradio.net/do-i-need-a-passport-to-cruise/