This week came details about what changes will be implemented when the Carnival Breeze heads into drydock on April 16, 2017. When she emerges from her two-week dry dock — which will be undertaken at the Grand Bahama Shipyard in Freeport, Bahamas — there will be some noticeable changes… including the addition of what’s become one of our favorite watering holes. 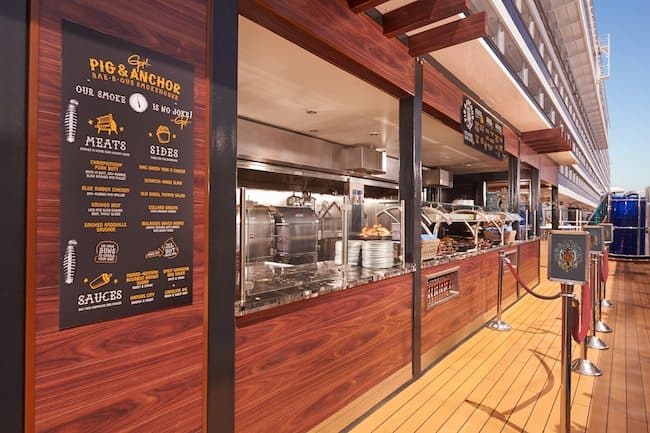 • The Plaza Bar at Ocean Plaza is being replaced with the Alchemy Bar, one of the coolest venues to be introduced to Carnival since the RedFrog Pub.
• Fat Jimmy’s Seaside BBQ will be replaced by Guy’s Pig & Anchor.
• The public spaces will get spruced up via new carpeting throughout the ship.
• Although less likely to be noticed by many passengers, there will also be new tile work and lighting installed.

Carnival Breeze currently sails seven-night year-round Eastern and Western Caribbean itineraries from Galveston, Texas. This will be the first dry dock for Carnival Breeze — a member of the line’s Dream class of ships — since she joined the fleet back in the spring of 2012. Having originally done Mediterranean voyages out of Barcelona and Venice, the Breeze later was repositioned to Miami, where she did trips to the Caribbean and the Bahamas. In the spring of 2016, the ship was relocated to Galveston when her sister ship, the Carnival Magic was shifted to Florida.